Once again, April rolls around and I can't wait to have the first Midnight Stir Fry event of the year, despite weather reports calling for precipitation!  Rain be damned, we're cookin' anyway!


UPDATE!! I fixed the video at the end of the page!
Scroll to the bottom or click here to see it on YouTube!


Note:  Hold shift, then click on any image to open it full-size in another window! 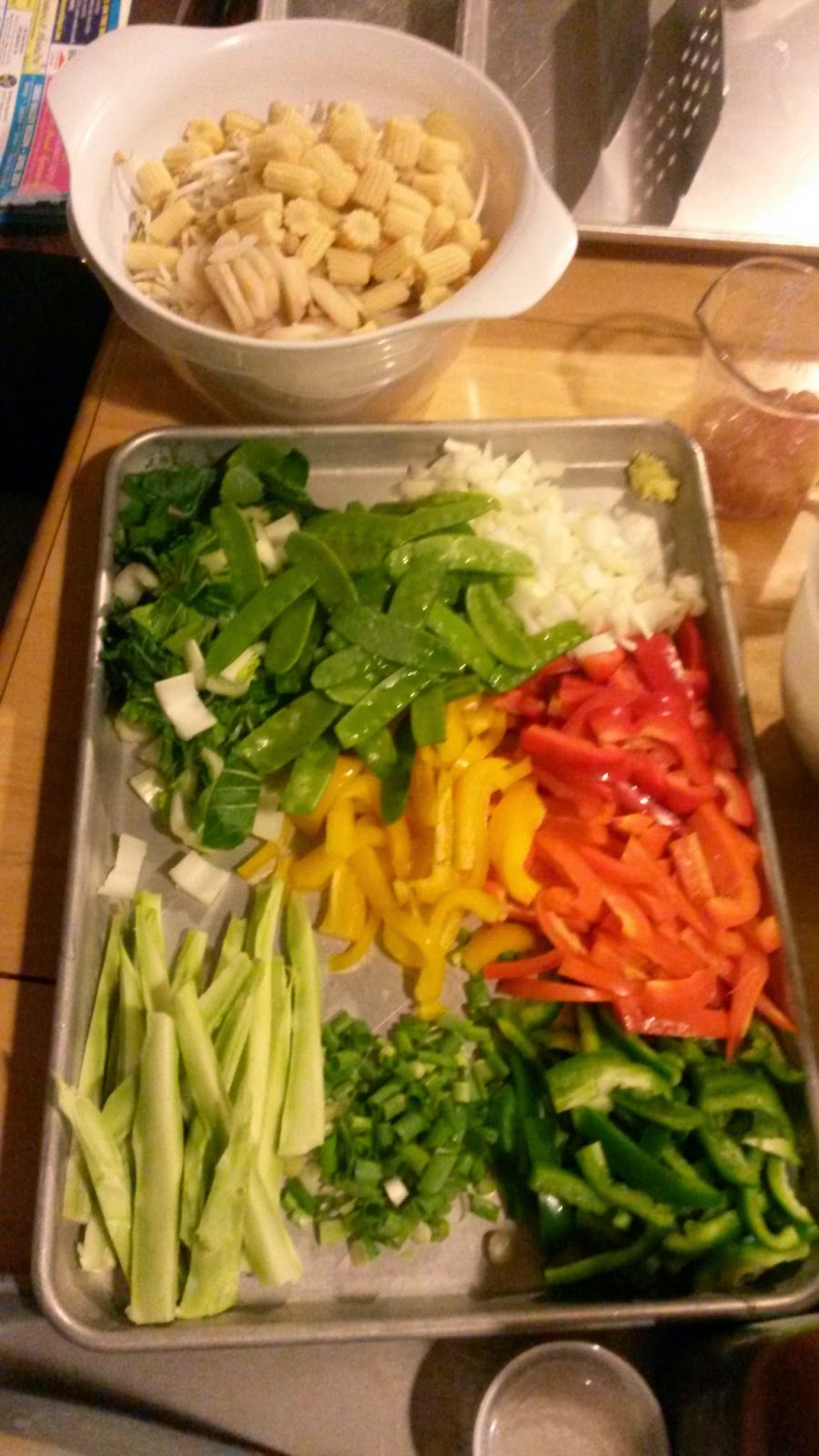 Each year, just as the weather is starting to get nice out, I start jonesin' to do some stir fry over the firepit on the custom-made Mongolian-style grill Schertzer's buddy made for me!
Also, without fail, it rains like crazy on the evening we decide to cook it up!  This is Michigan, after all, so I guess it shouldn't come as a surprise!
As you can see above, we start by whackin' up all of the vegetative matter into manageable chunks! 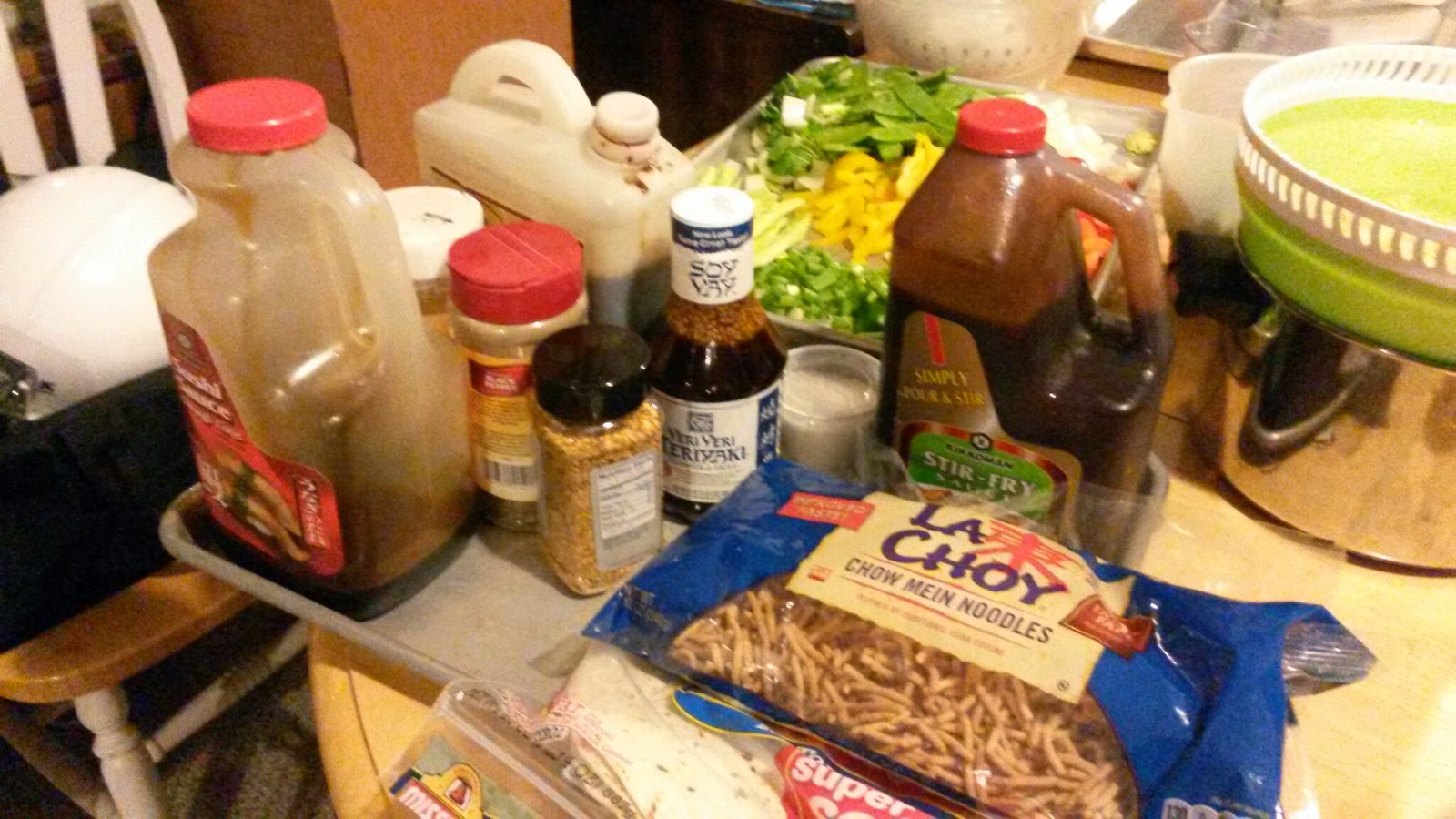 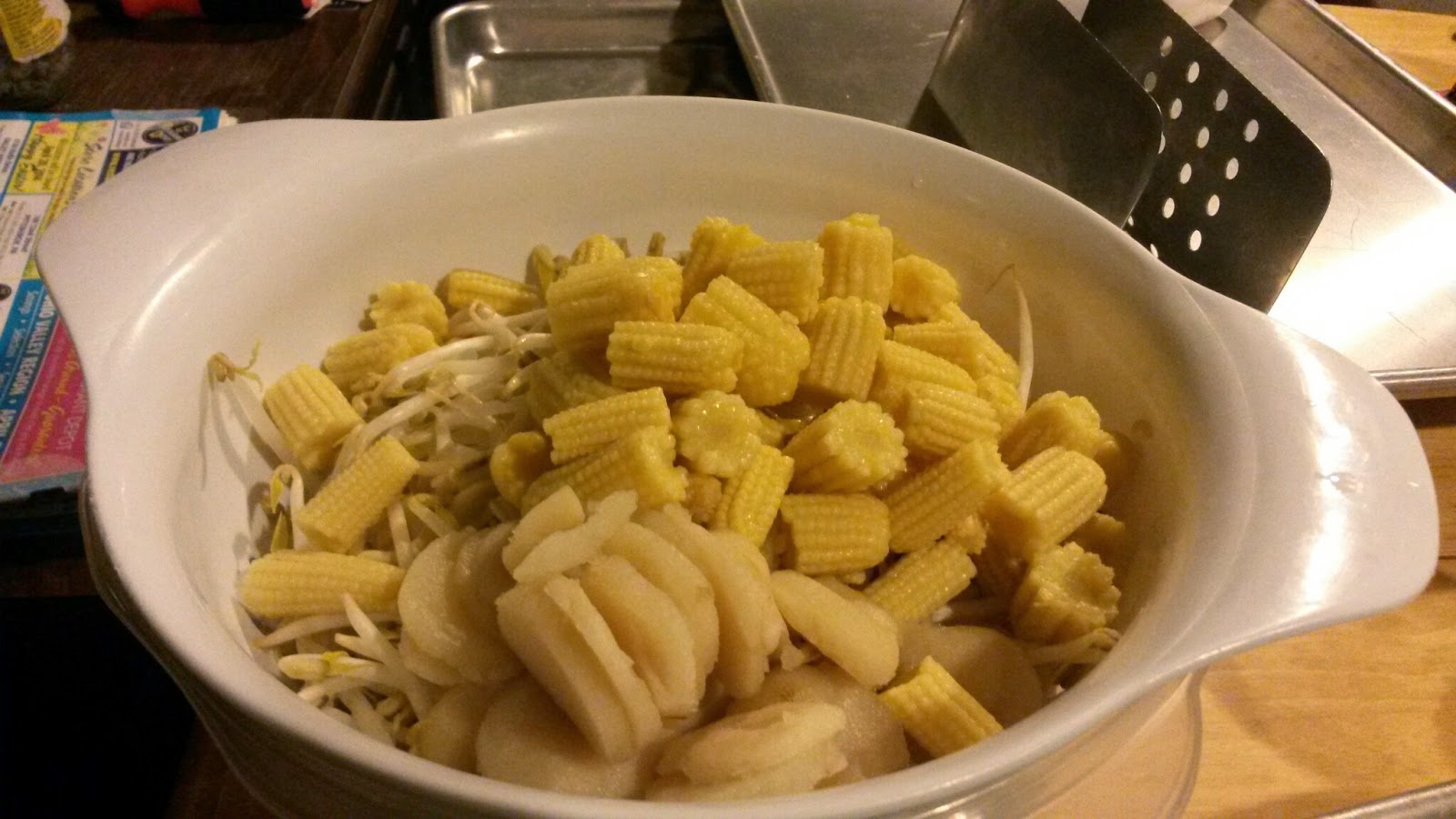 Above, we got 1 lb of bean sprouts, 1 can of baby corn, and another can of sliced water chestnuts, all drained and rinsed. 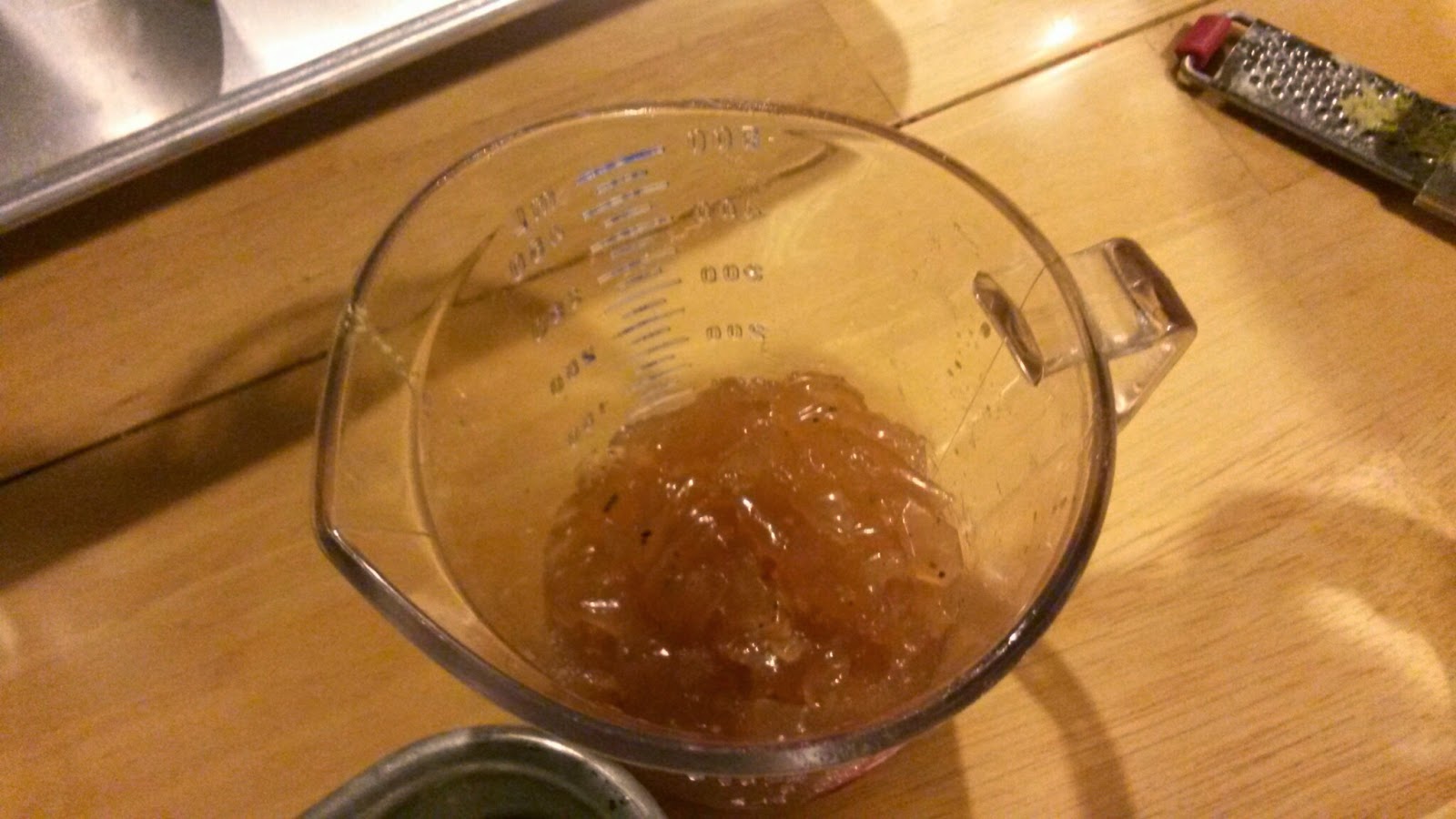 This is the liquid gold (a.k.a. au jus) from the Sam's Club rotisserie chicken that I pulled apart for this stir fry!
This single ingredient is arguably one of the most important of all of them in the recipe!
Using *real* stock or drippings from a bird imparts a depth of flavor and savoriness that cannot be obtained merely by combining all of the other remaining ingredients on their own!
All of you strict vegetarians out there that are balking at this can forego using chicken stock, but I wouldn't recommend it! 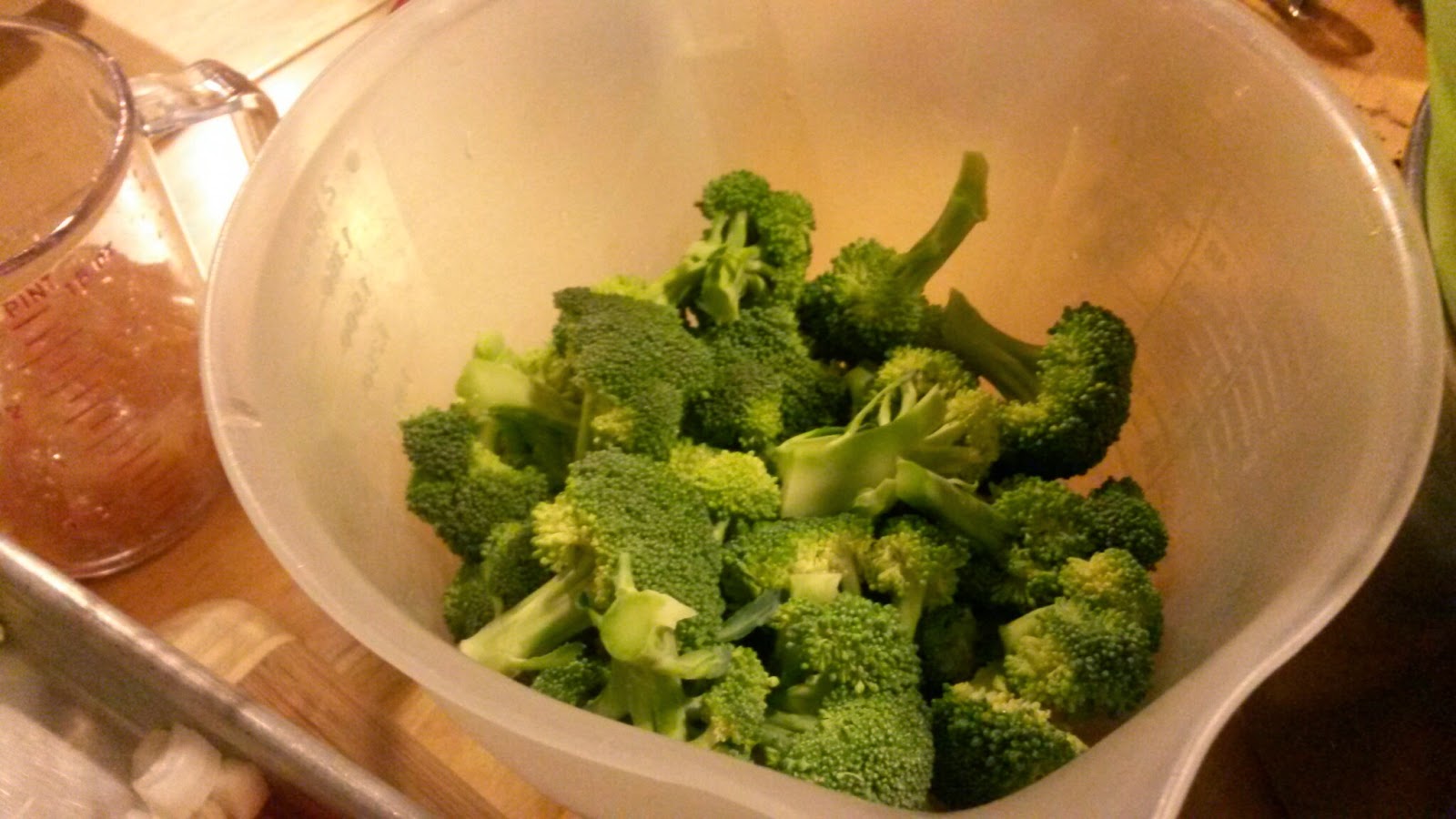 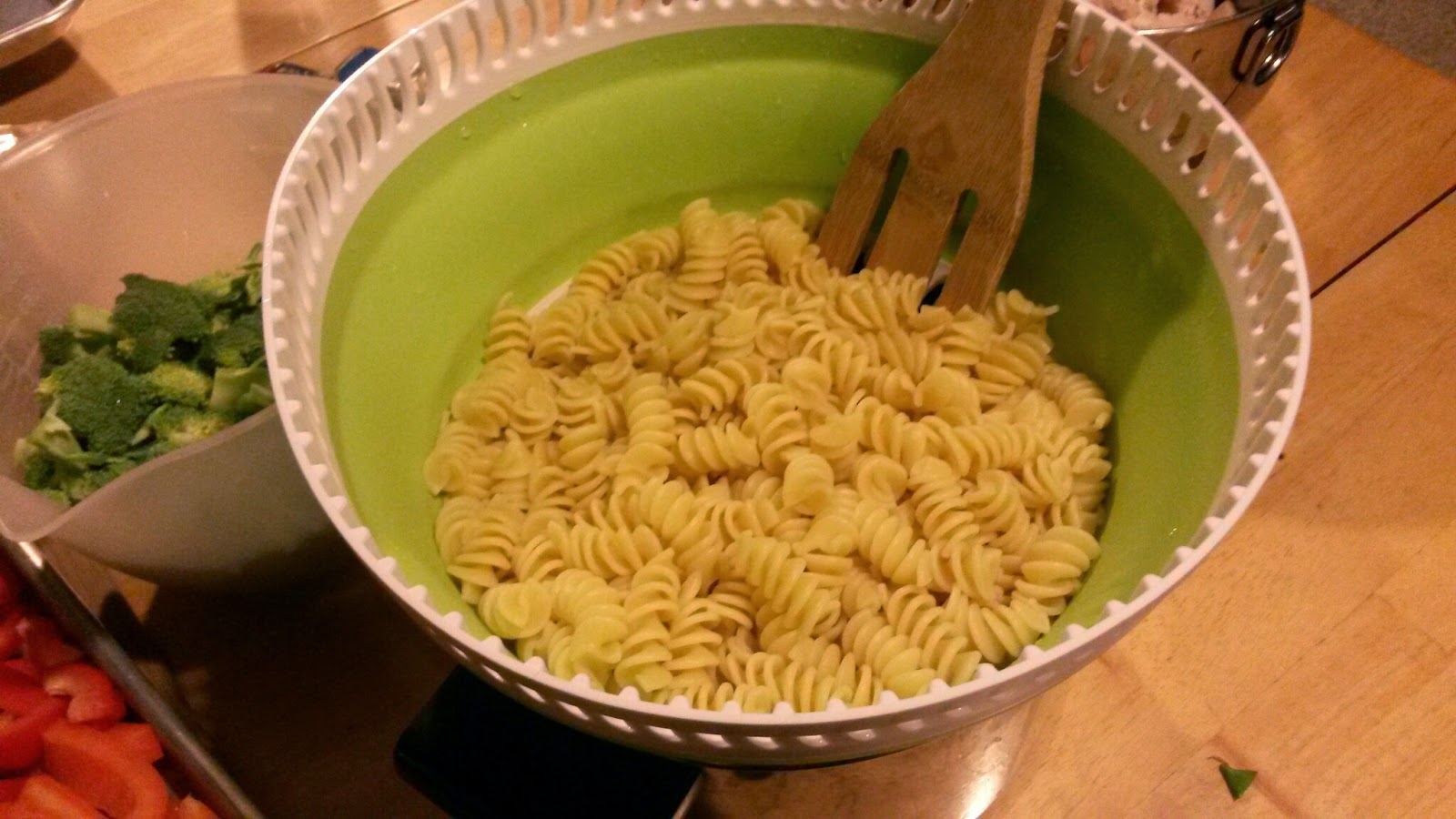 IMHO, cooking this way needs the proper ratio of ingredients, which roughly equates to:
4 parts veggies : 1 part soft carbs (rice or pasta) : 1 part meat (chicken, shrimp, pork, caribou, etc!)
Your opinion may differ, but mine is right! :)
By sticking to this ratio of ingredients, it matters not what kind of sauce you concoct to go with it!
You could just as easily use curry spices if that is your thing, or make it a "cowboy" stir fry by adding bbq and smoked seasonings,... or perhaps an italian-inspired dish by making a tomato-basil-garlic marinara!  The choice is yours! 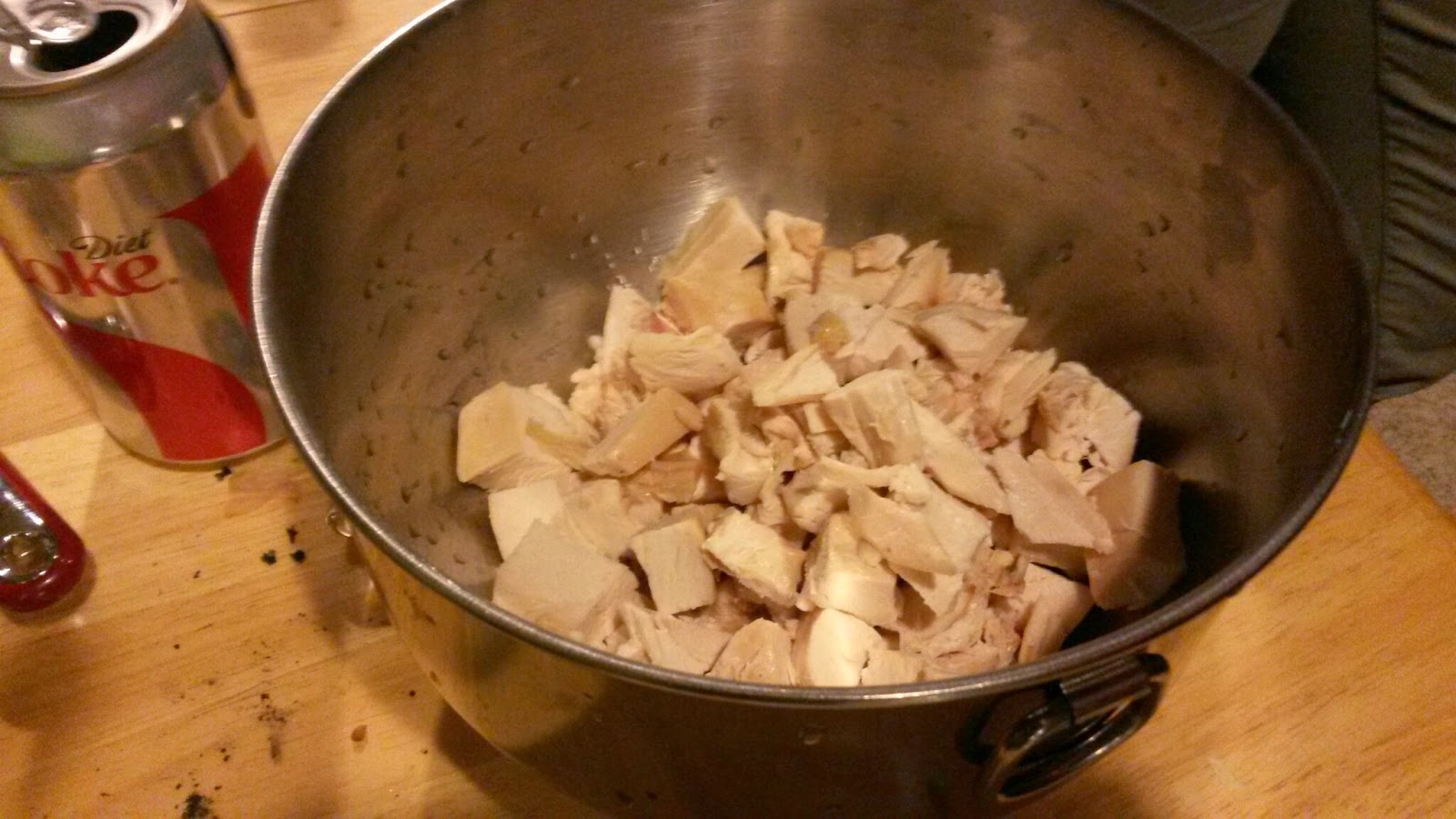 This is (most of) the meat from one Sam's Club rotisserie chicken!
Sure, you could leave out the meat, if for some crazy reason you are one of those people (a vegetarian)! :)
Personally, you are sacrificing a lot of flavor and nutritive value by limiting your diet to not include meat, but hey, you can go ahead and continue to make poor culinary choices!  I'm not gonna judge you (too much!).  Hah! 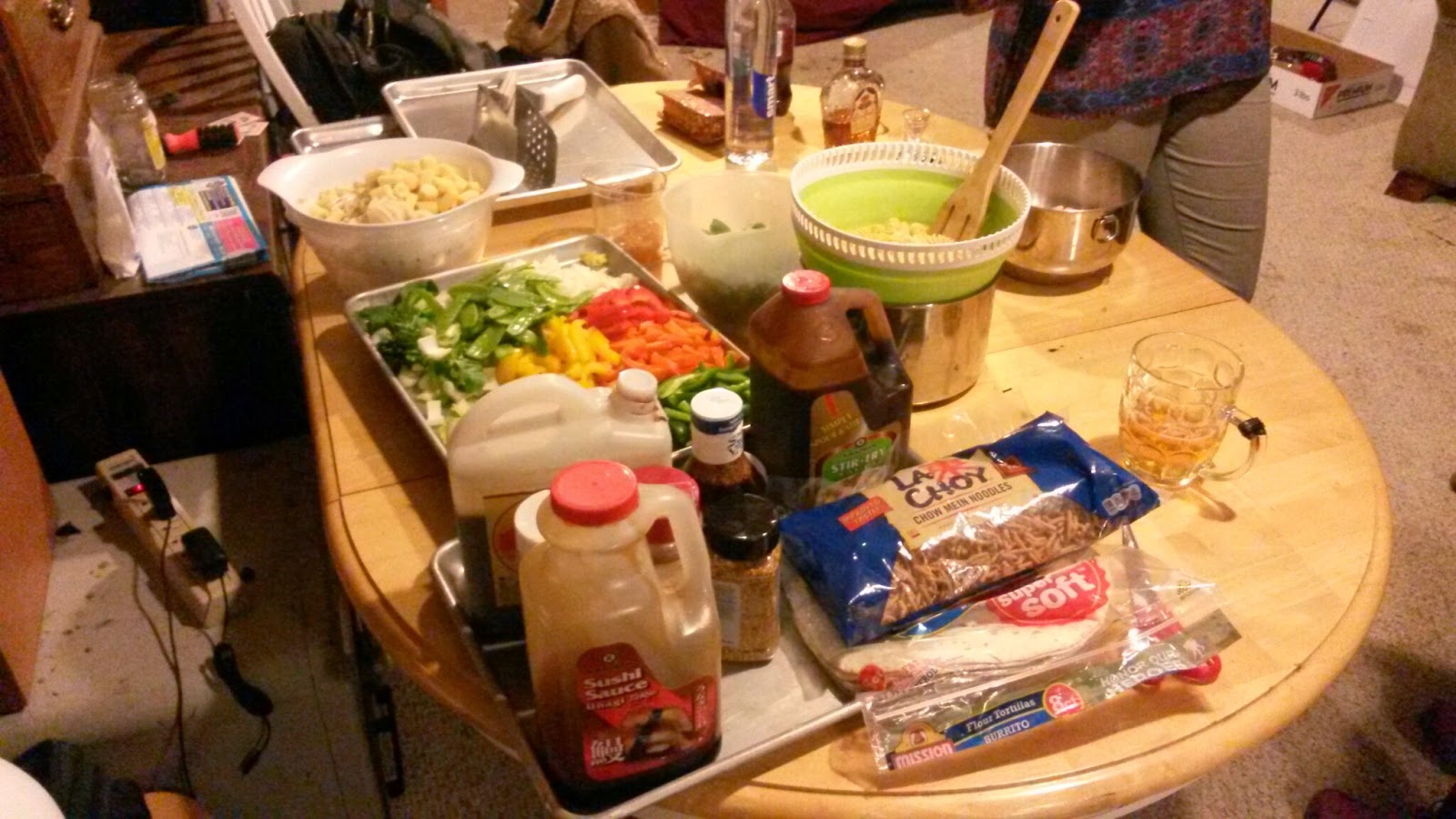 Looks like we've finally gathered everything together!
Let's get cookin'! 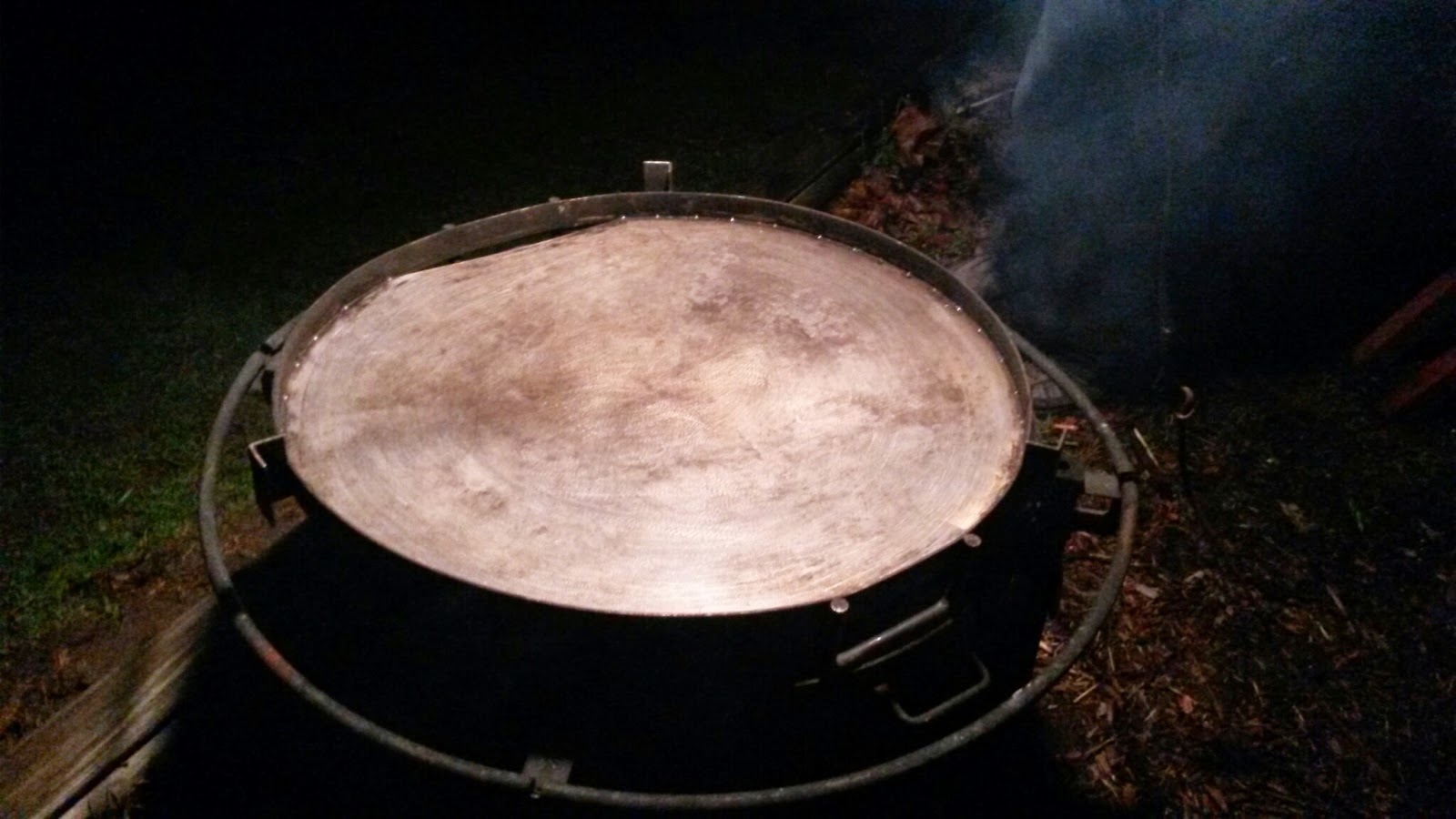 Matt was cool enough to build and maintain the fire while we were prepping inside! 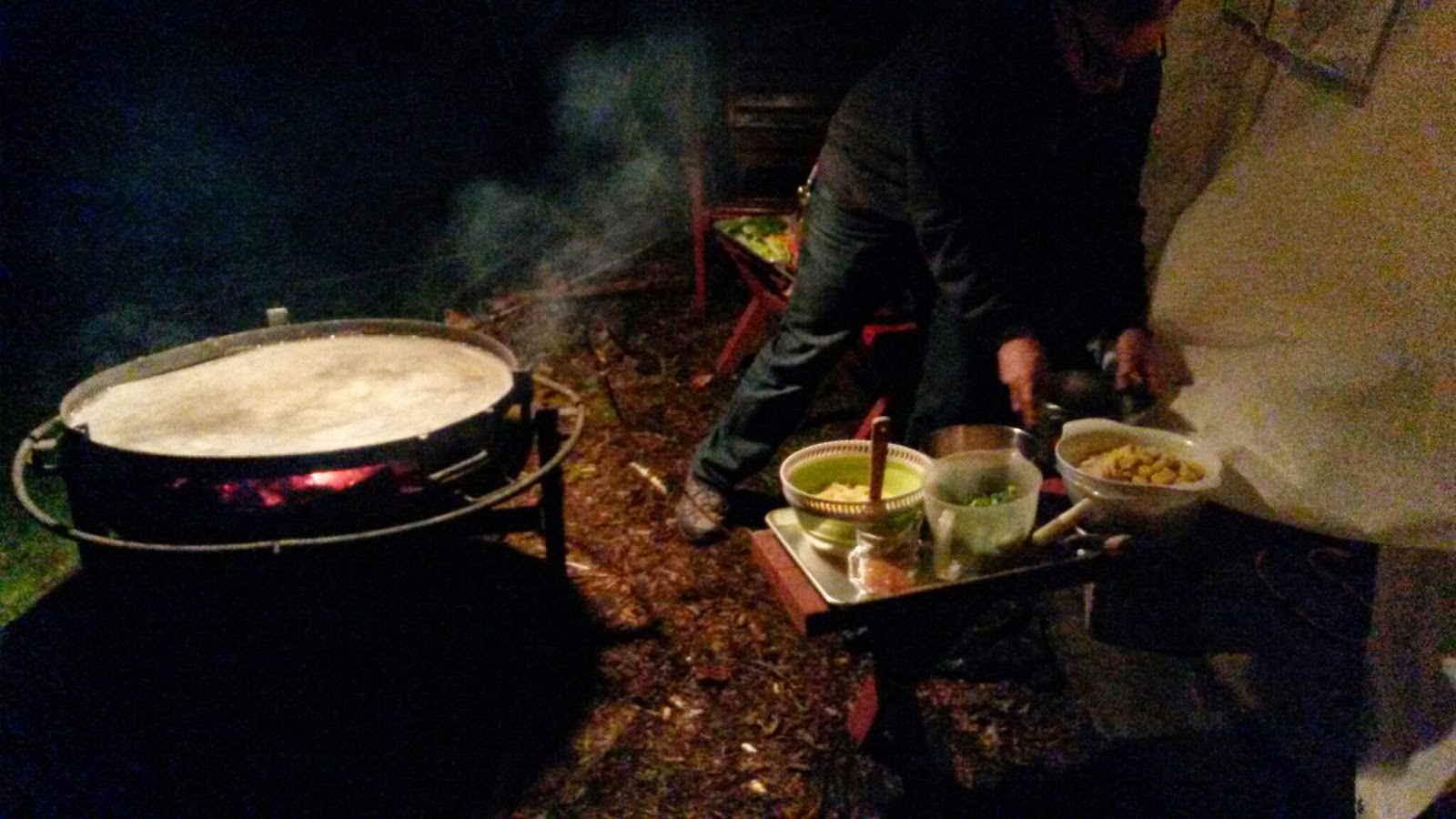 While Byrnes was finalizing the prep work, I managed to get a bigass umbrella set up to keep us dry! 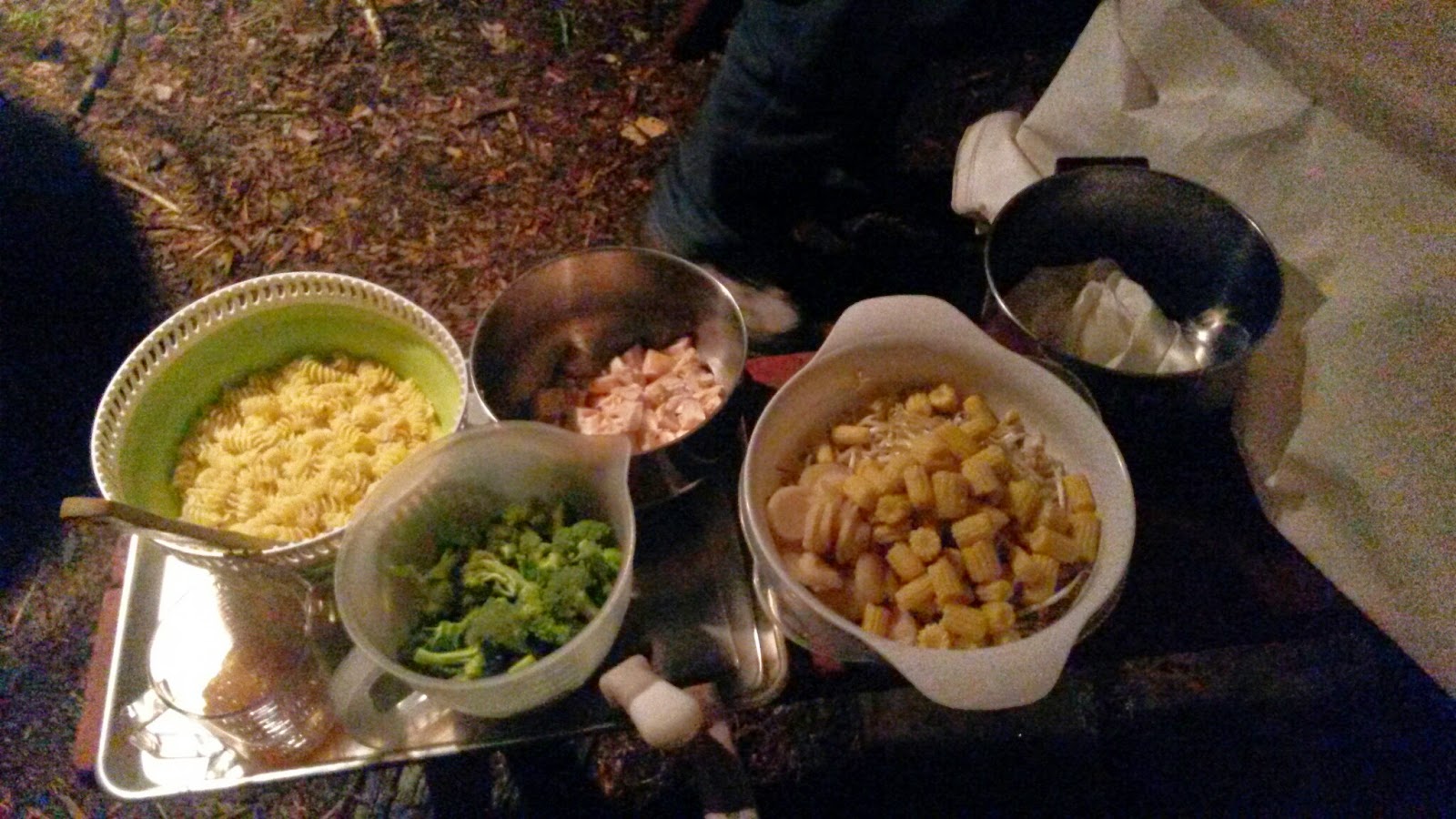 Make sure you grab some vegetable oil (shown top-right) so you can lube up the cooking surface before you toss the food on! 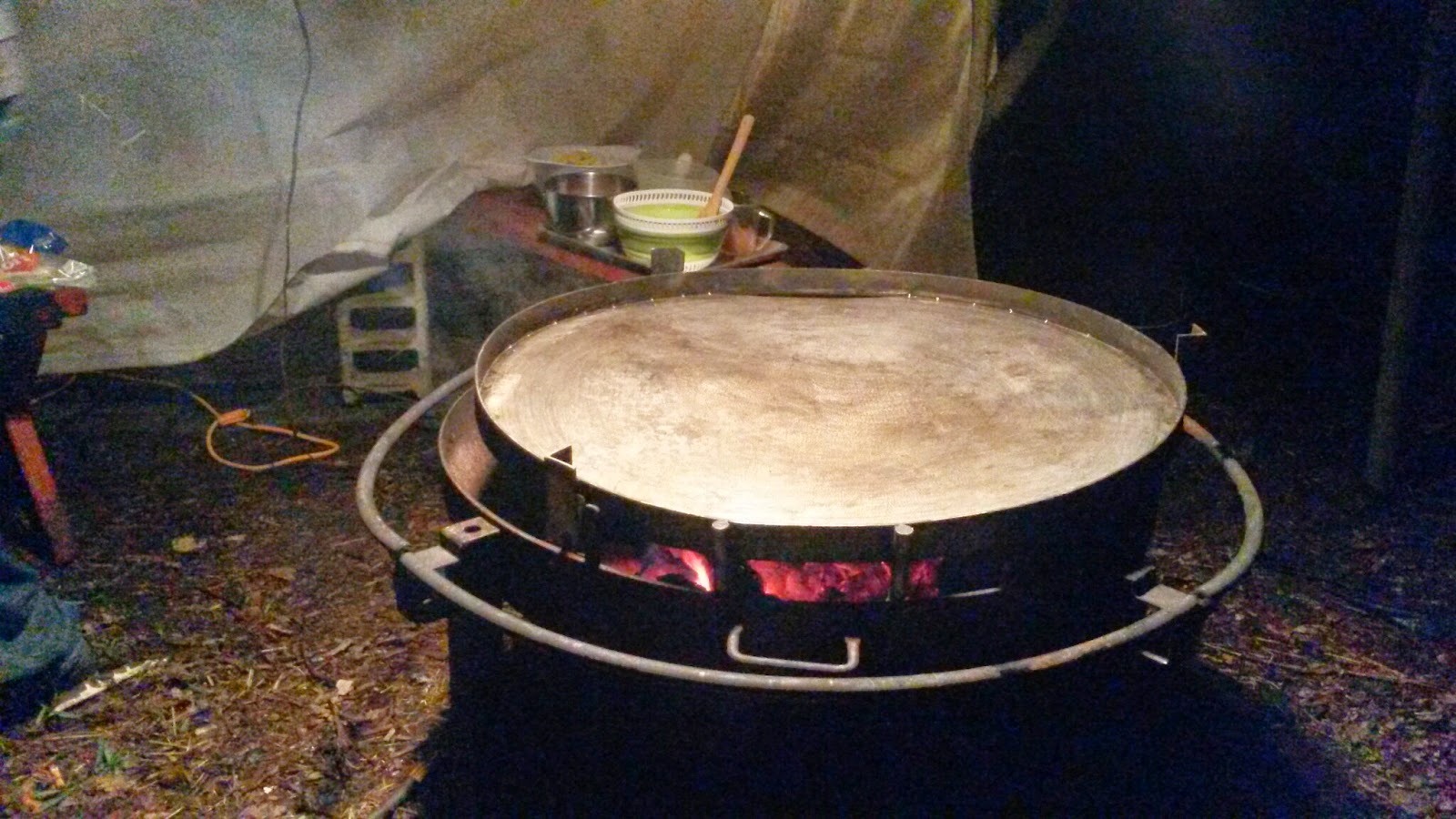 It's important to have enough coals built up to get you through the cooking session, otherwise you'll need to add more wood, which inevitably makes the temp fluctuate greatly, thereby increasing the difficulty in keeping the temp under control.  So, in other words, build a fire two hrs ahead of time and be sure to build it big, then stop adding wood 30 min prior to cooking to let it die down to a manageable temp! 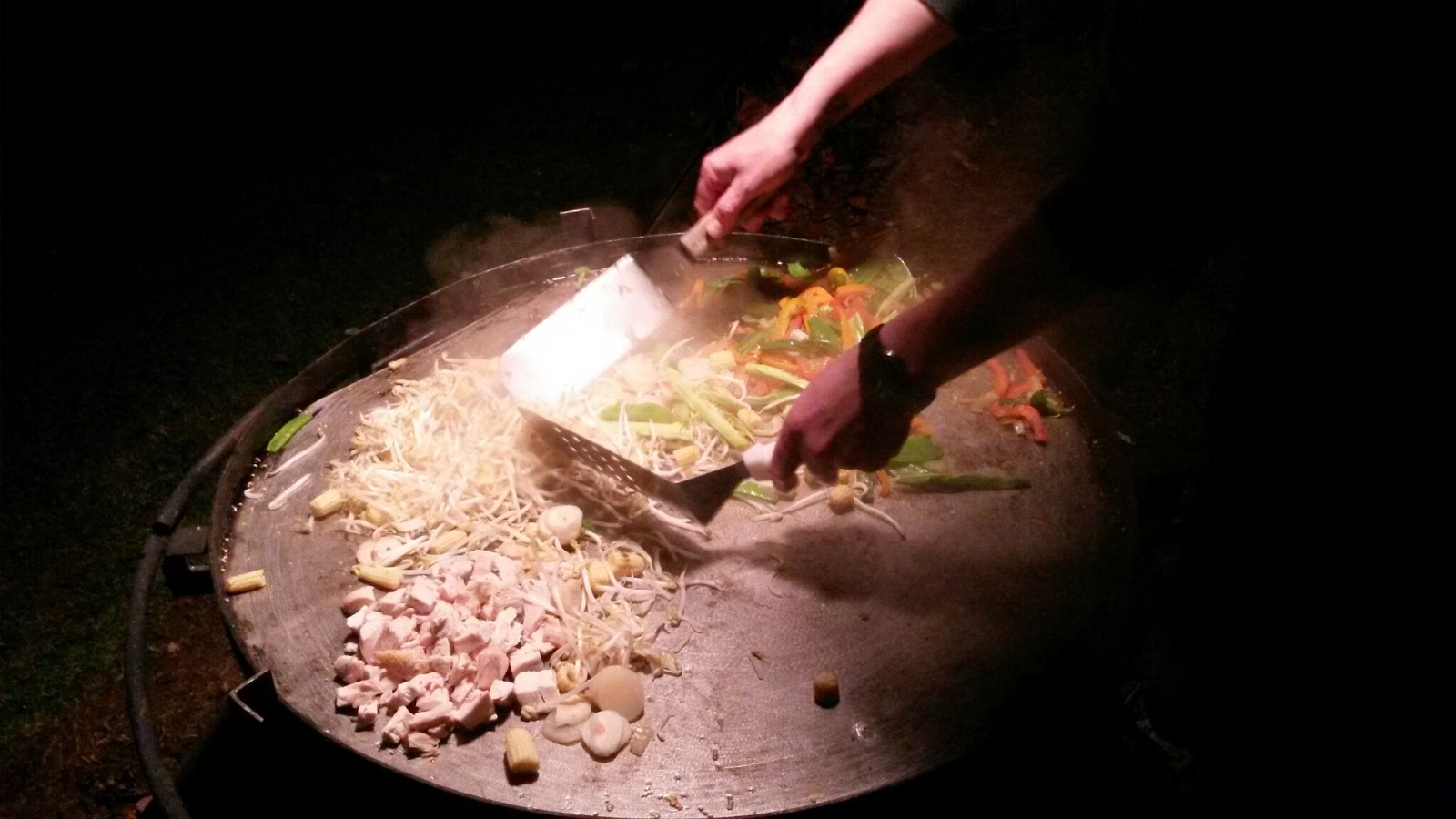 Once you're ready to go, lube up and toss the ingredients on! 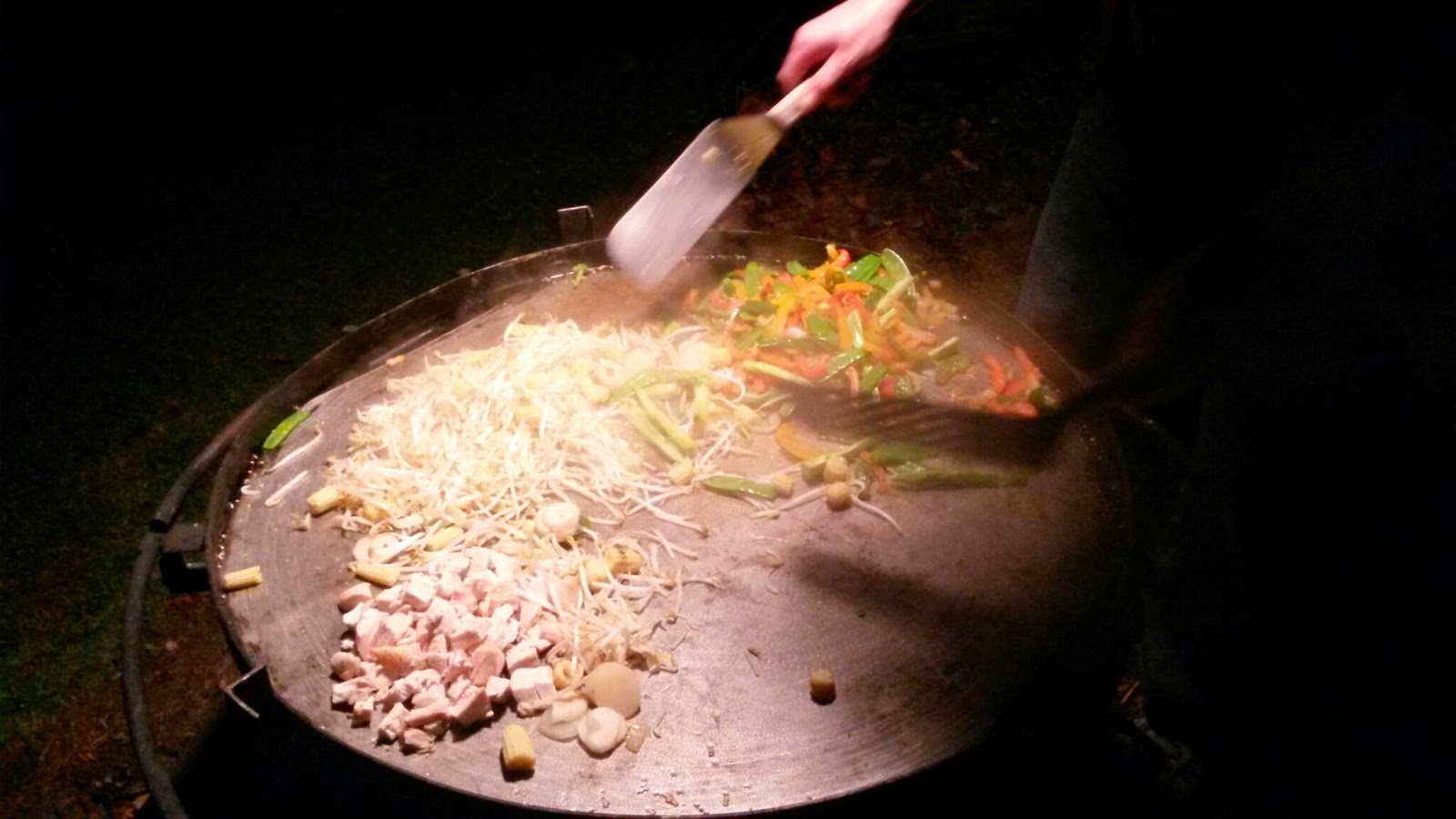 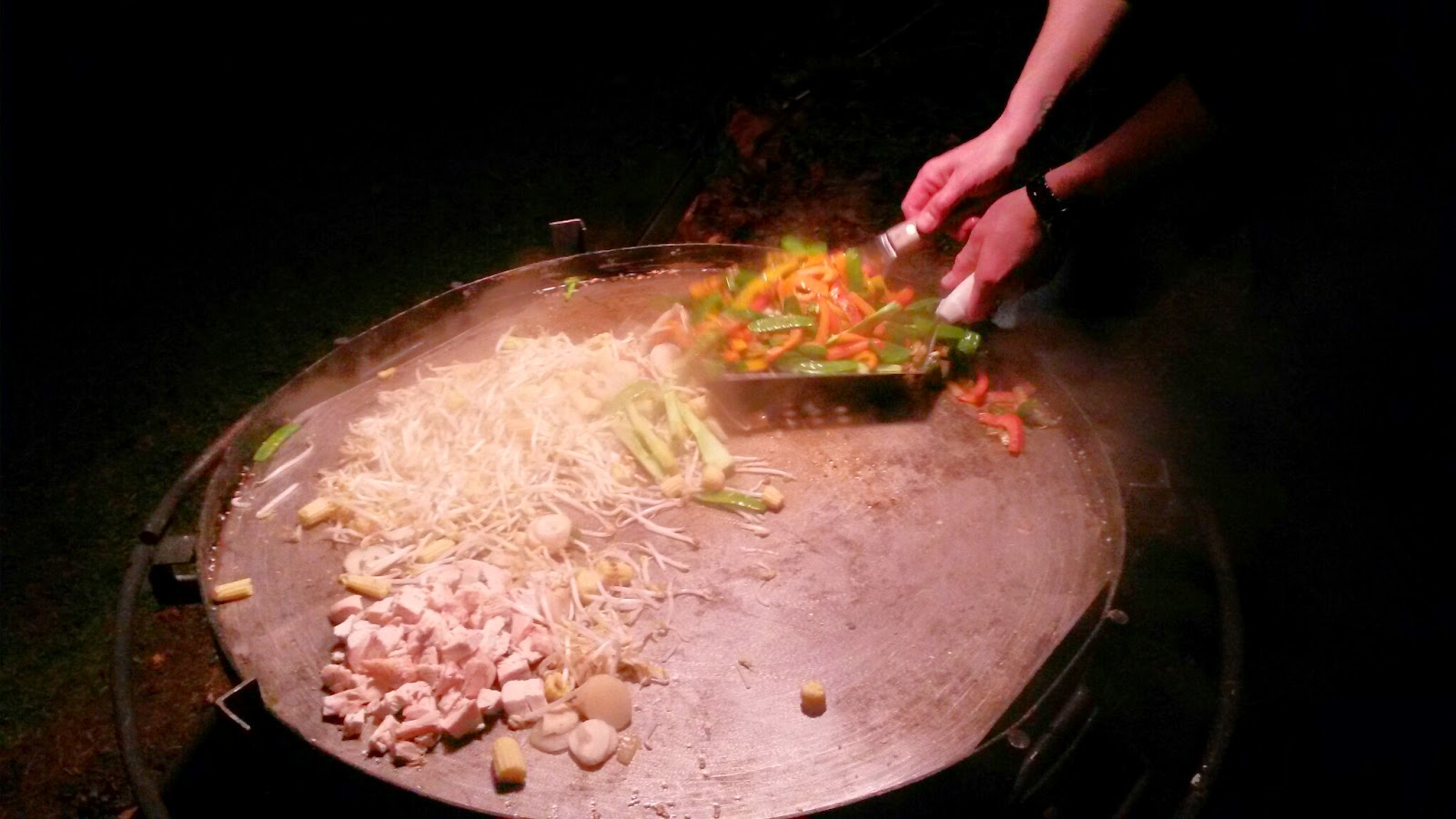 Keep stirring and frying as necessary! 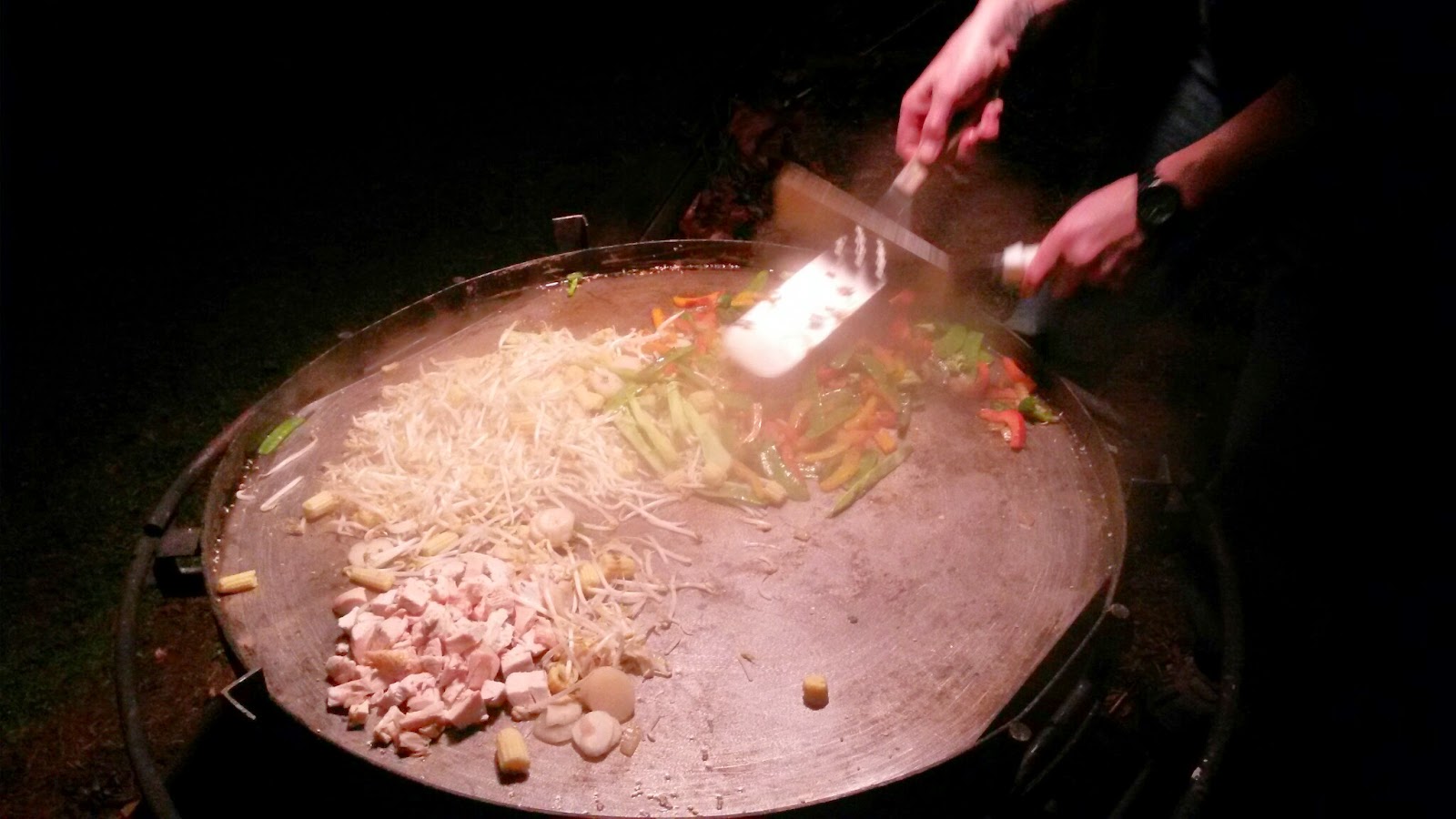 Be careful not to let things sit still too long, esp if the fire is rocket hot! 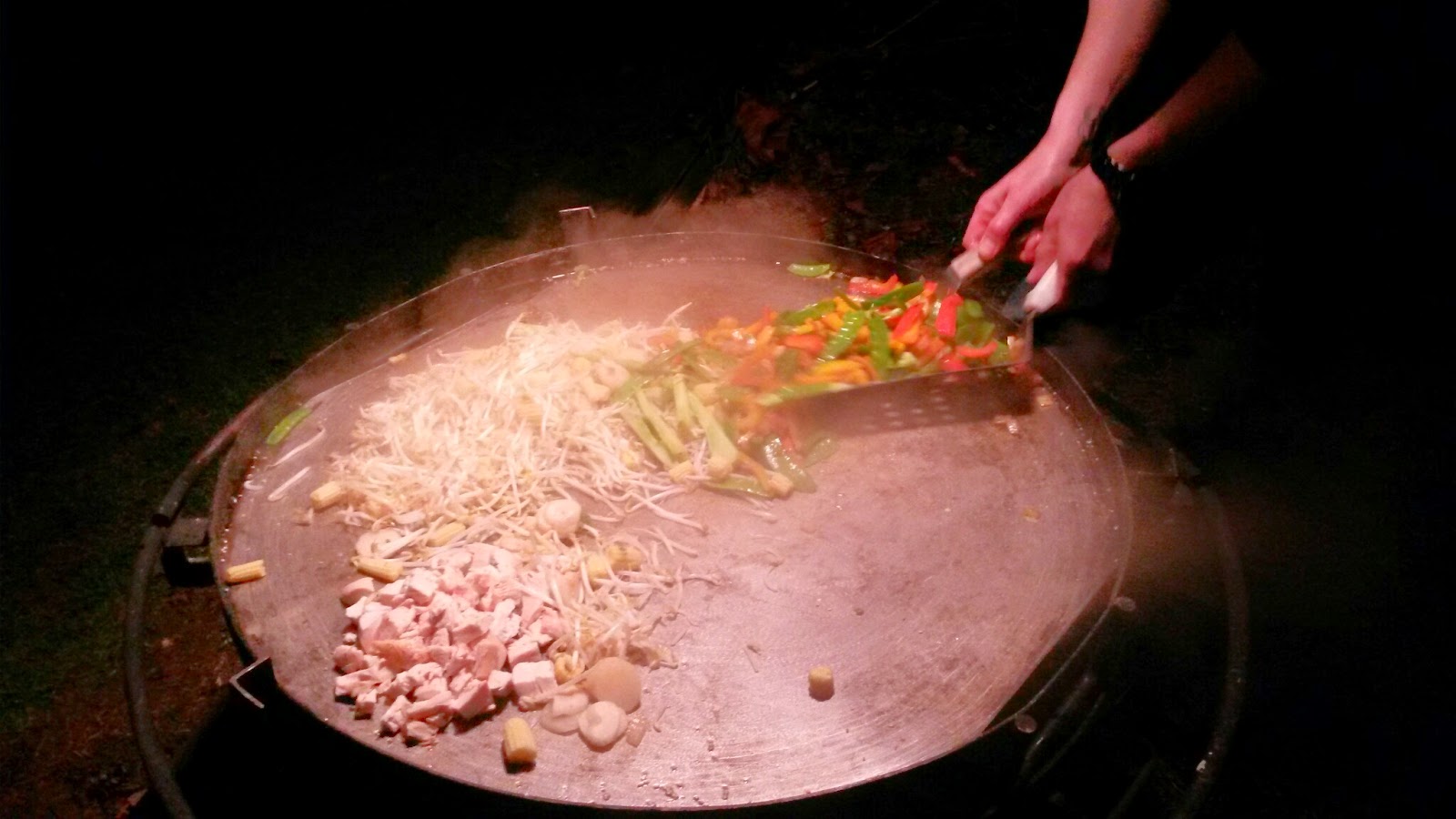 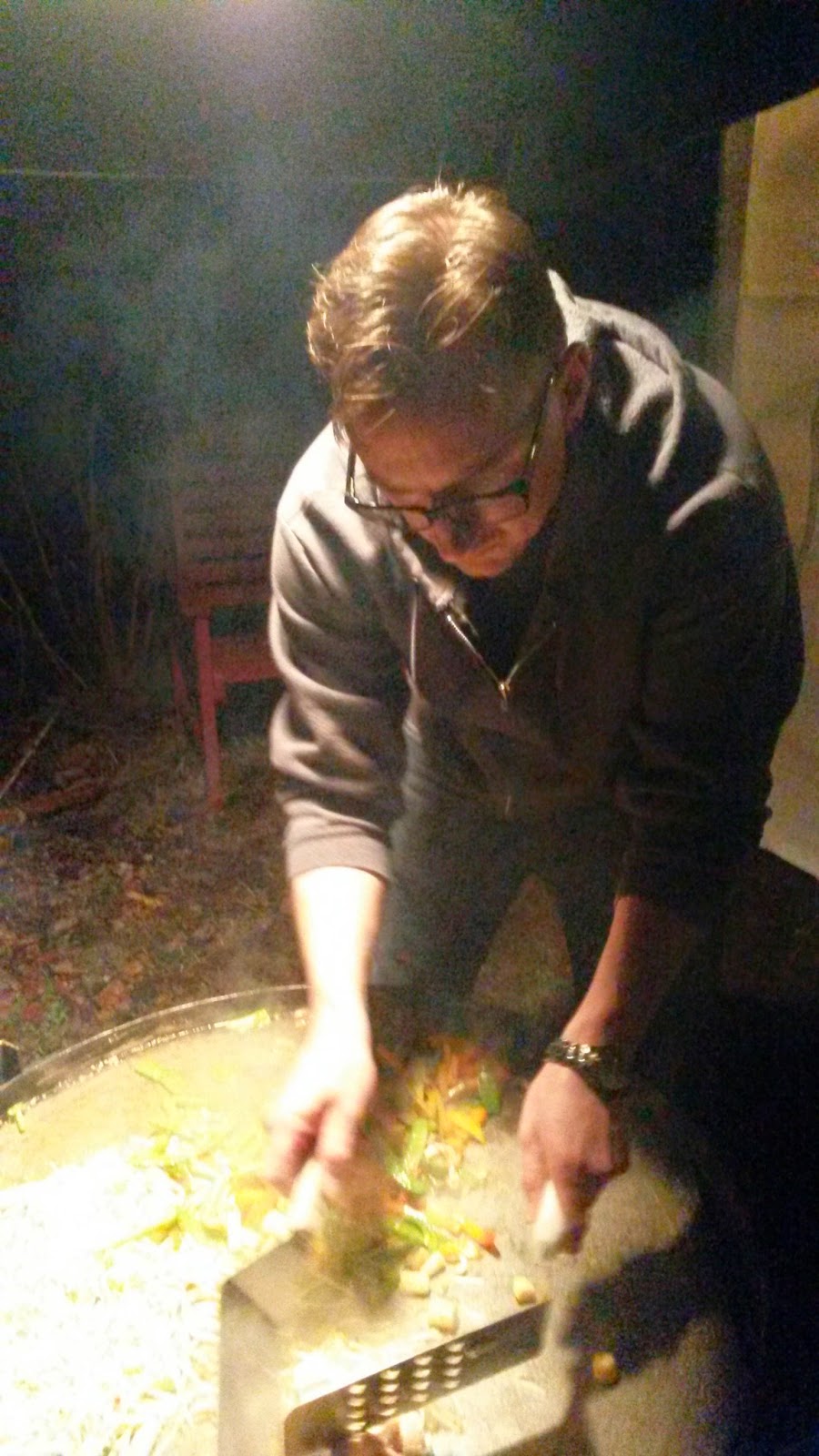 Byrnes is at the helm of this ship! 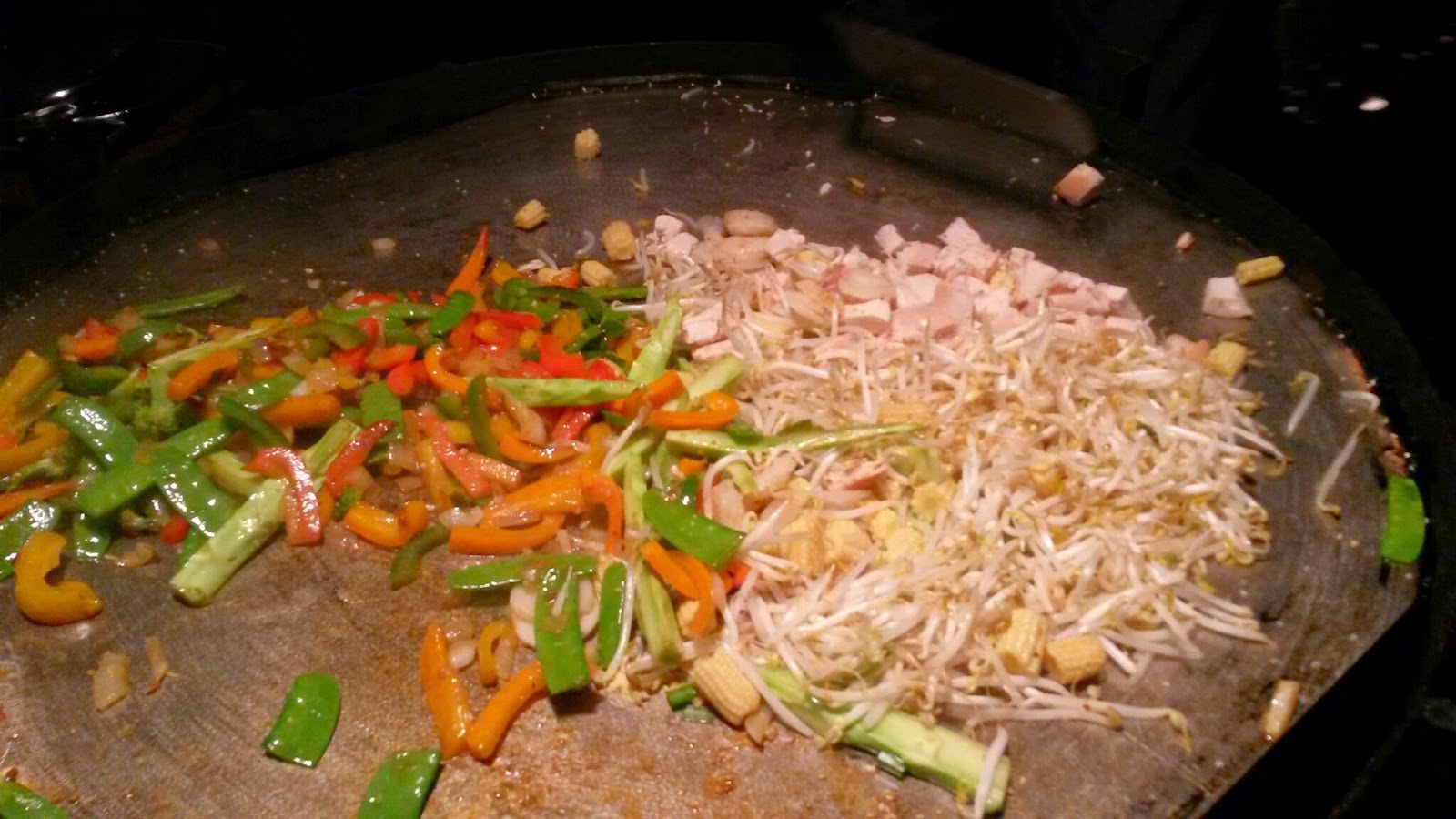 Ohhhh mannnn!! It's getting there! 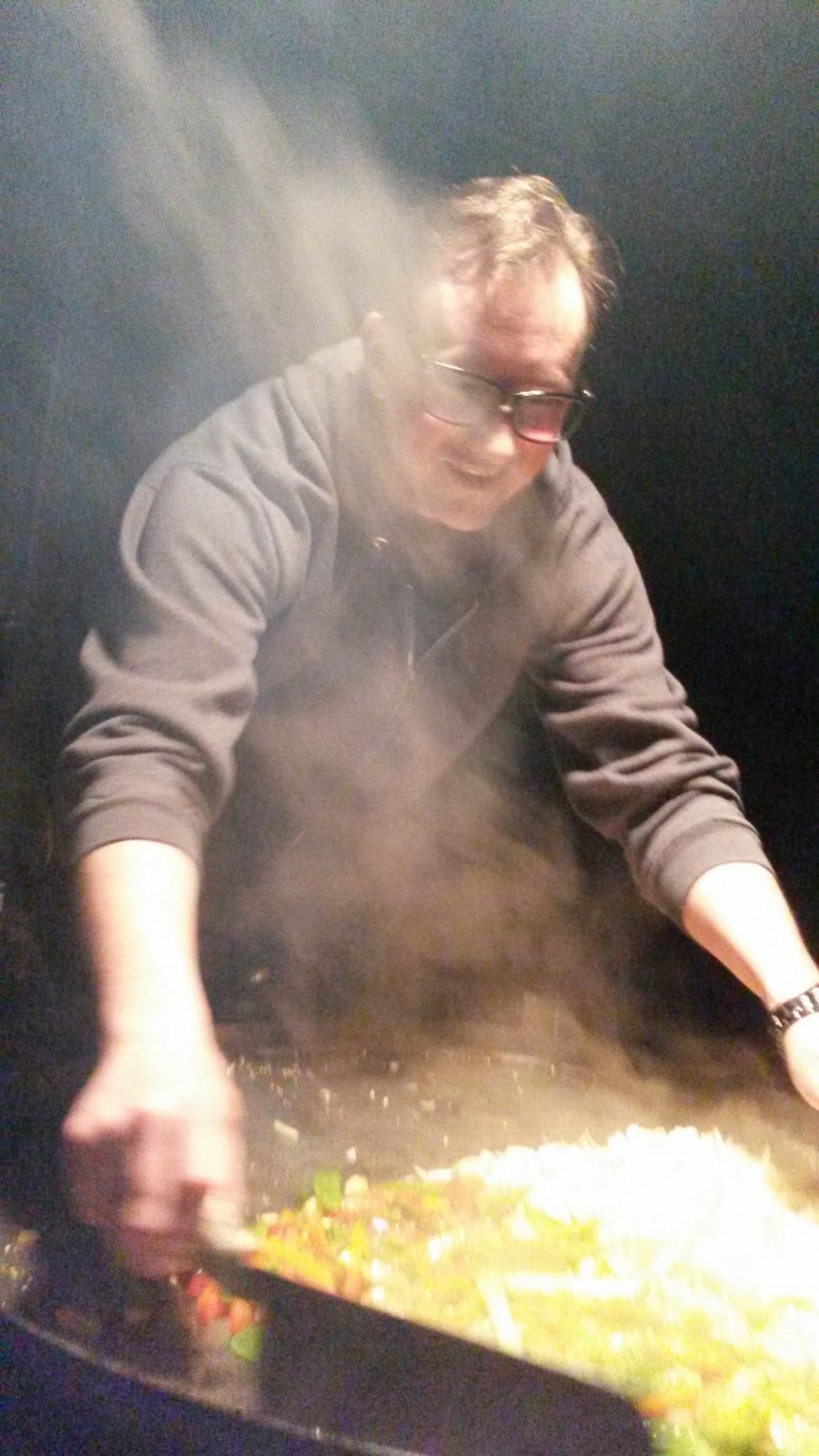 Hey!  Smile for the camera! 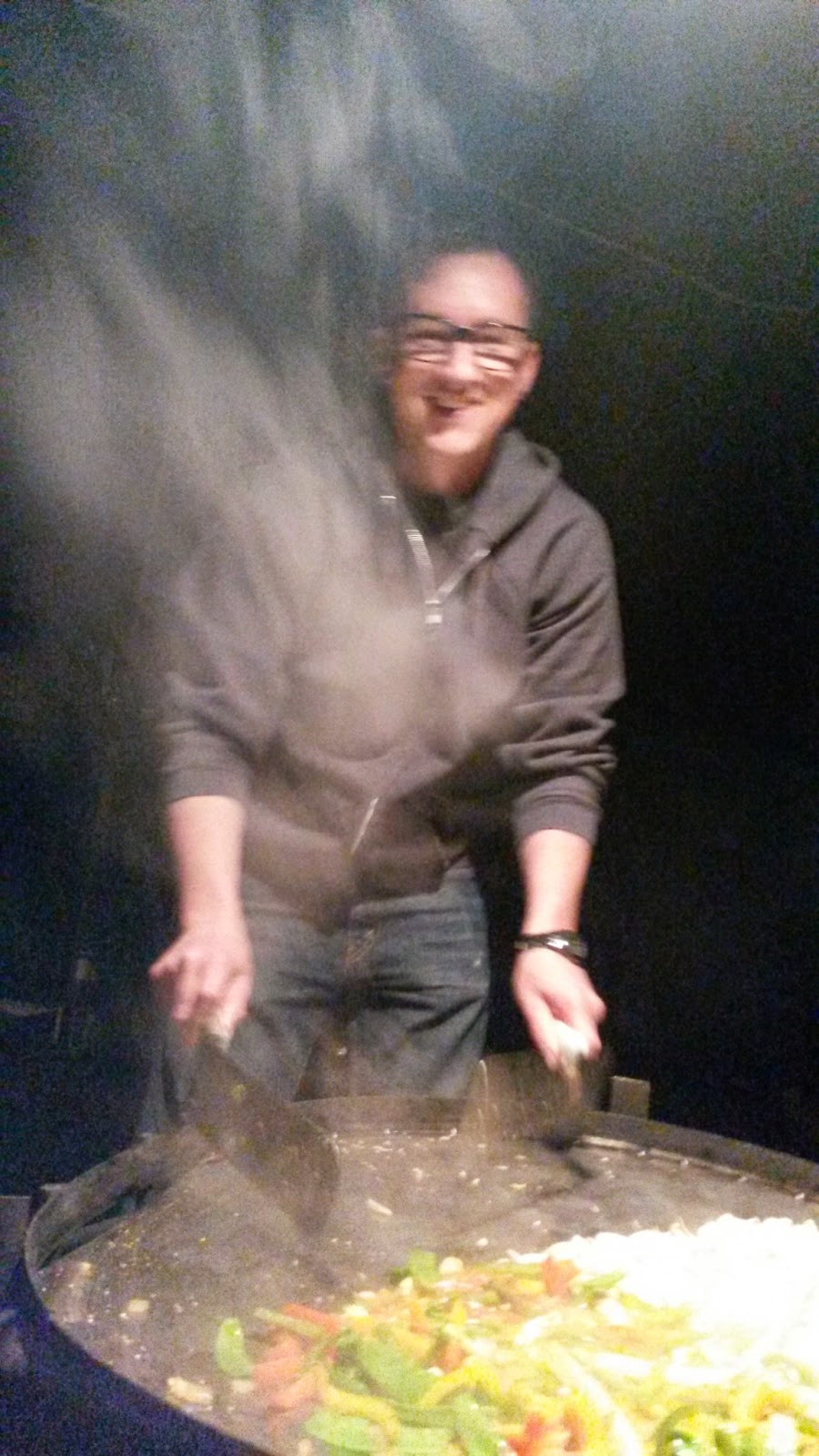 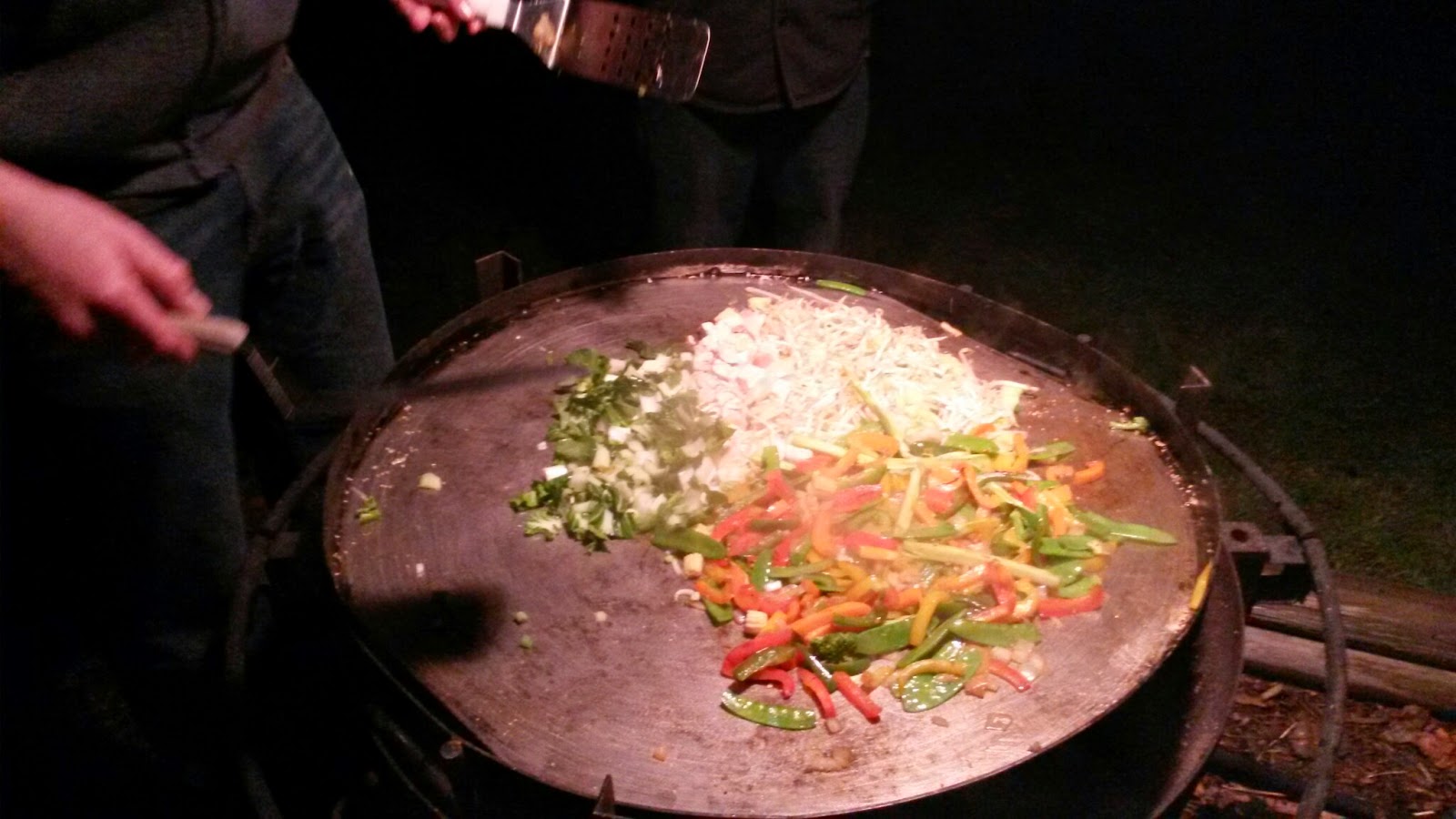 At this point, we've just added the last of the veggies that don't take as long as the rest --  namely the scallions and rasped ginger!  This shot was also taken just prior to throwing the chicken on!
Had the chicken not been fully cooked, it would have gone on waaaay sooner, but because it was already cooked, it only needs enough time to heat up! 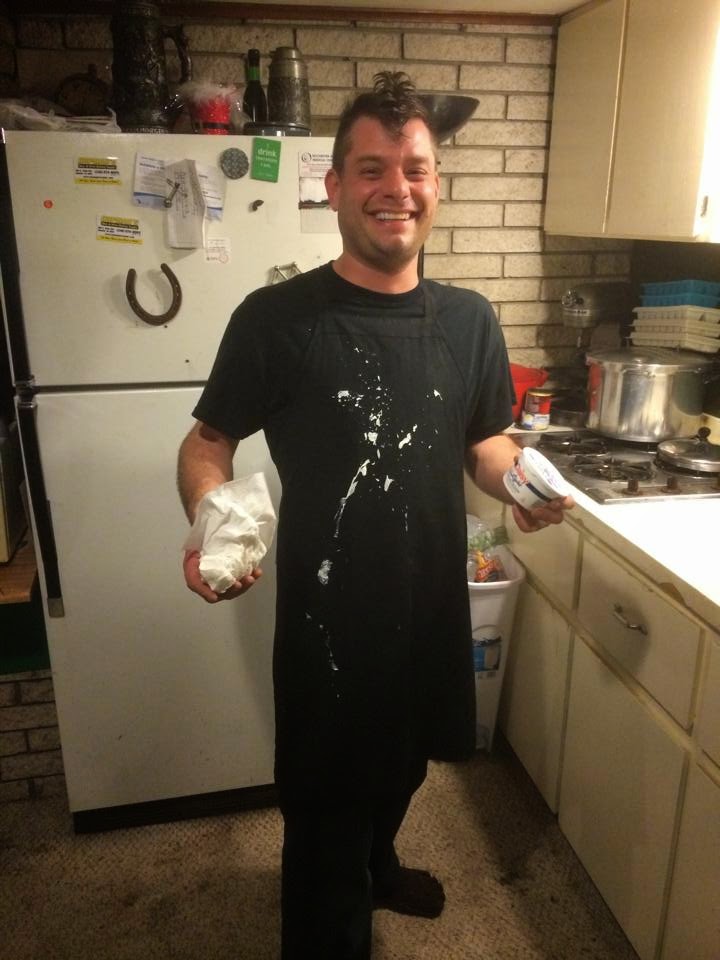 When Lauren asked if I had any sour cream to go with this stir fry, I merrily went off to grab what I had from the fridge!  I went to shake it up by smacking the container up against my other hand repeatedly... until it blew up all over me!!  Whoops!!
As it turns out, Byrnes came in at just the right time to snap a pic of me lookin' like a knucklehead wearing half a tub of sour cream! Shown above it the stir fry just before we added the pasta (with a bit more lube) then finished up the batch by dumping in the components of the sauce!  Things got hectic and I neglected to take pics of those steps as well as more pics of the finished product!  Doh!!
Don't doubt me when I say that this stir fry went over as a hit with the crowd!
We had managed to make far more than enough food to stuff 9 people w/ as much as they could handle!
The only thing I would change for next time would be to double up the amount of meat in the batch as well as making sure that I have enough grilled flour tortillas on-hand for those that wanted to wrap up stir fry!

My way of capping off such an awesome evening was to blow off a 500 gram mortar at midnight!
Somehow, I managed to catch it nicely on video!  Scope it out below!