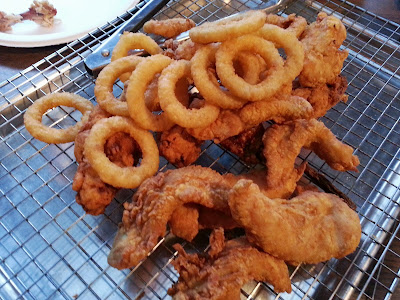 Hand-breaded chicken tenderloins are so damn good that it's tough to make enough to have leftovers!  Get a load of what it takes to make these mouth-watering morsels!


'Nuff fartin' around! It's time to bread up some chicken, yo! 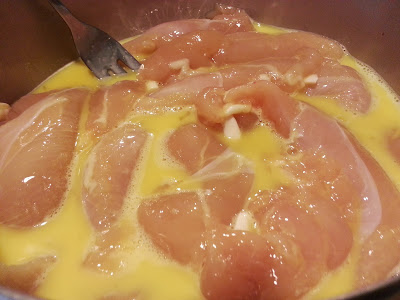 Kick things off by chuckin' the chicken in to a bath of nicely beaten huevos! 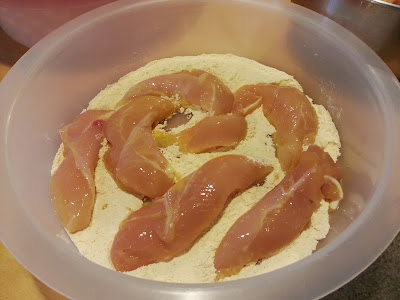 Place only as many as will fit with a little elbow room to spare in the breader!
You don't want to put too many in at a time or it won't bread them properly! 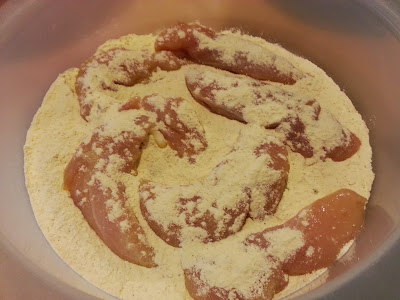 I like to shake just a little bit of Zatarain's breading on top of them before tossing them about (if I've got enough to do so!) 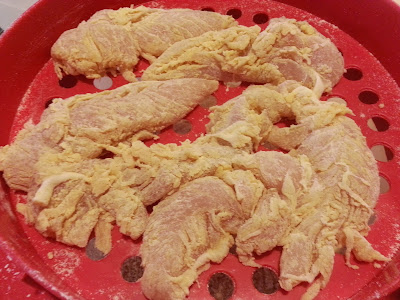 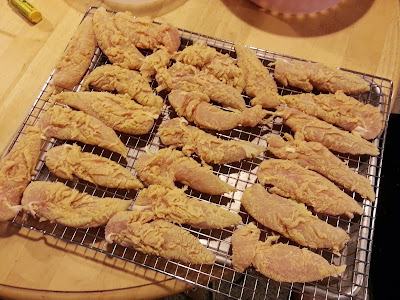 Bam!  Before ya know it, you've got breaded t-loins! 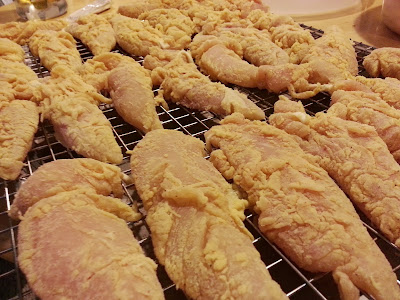 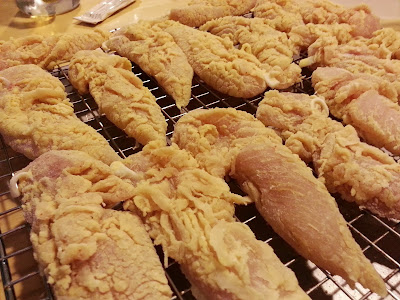 Why on earth would anyone pay $5-7/lb for pre-fried chicken tenders when they can so easily be made at home?! 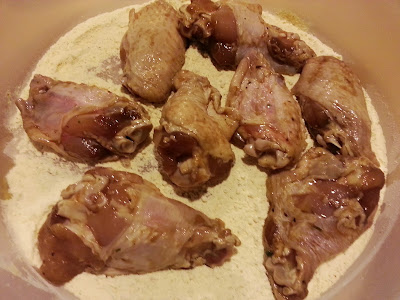 Let's get those teriyaki wings rollin'! 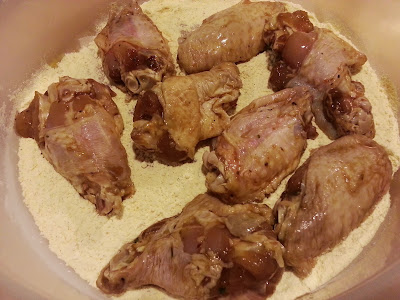 I marinaded these guys after having cut them off of a pair of chickens that I roasted the other day!
Two days in a teriyaki-soy-garlic-sesame sauce and they smell incredible! 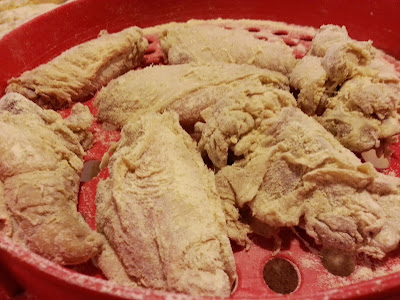 Here's what they look like w a layer of breading on them! 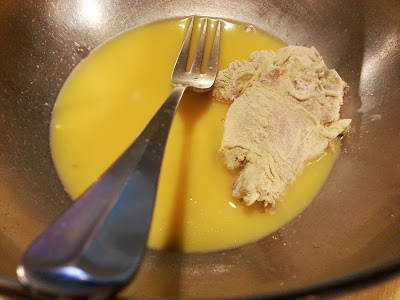 Looks to me like there is just enough egg left to put a second coat of breading on them!
So, back into the egg bath they go! 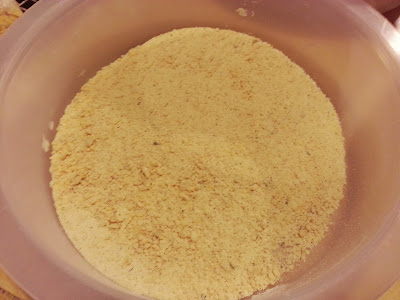 And this is juuuuuuust enough bread crumb to get the job done! 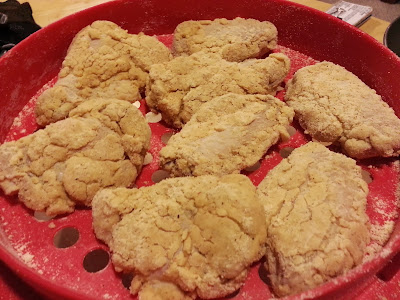 The second coat of breading should make them extra crunchy! 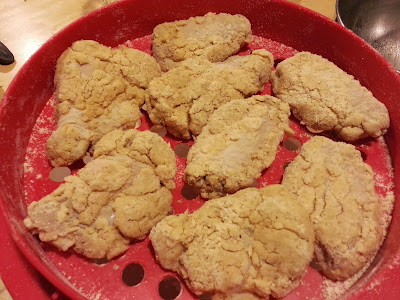 Go easy on them when you are putting on the second coat or you'll knock more off than you manage to adhere to the meat! 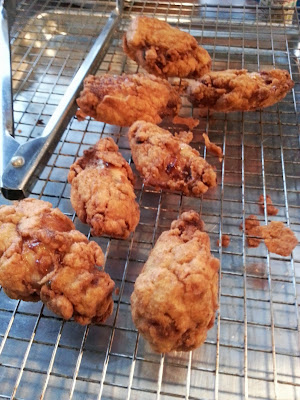 Here they are, fresh from the fryer! 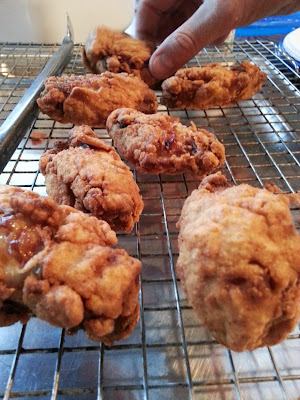 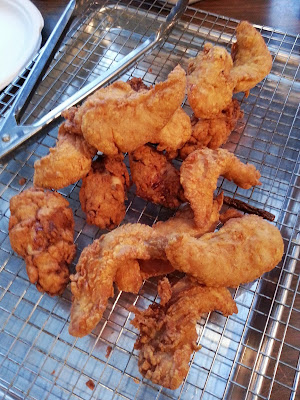 The first batch of chicken tenders are ready!!
Time to toss in another load! 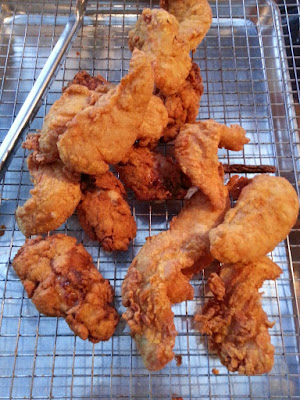 The best part about these is that they can be par-fried (dunked for under a minute -- just long enough to cook-on the breading), then frozen for use later on!  Doing so allows you to fire a few of them in the toaster oven for an easy-peasy heat-n-eat meal when the last thing you feel like doing is cooking! 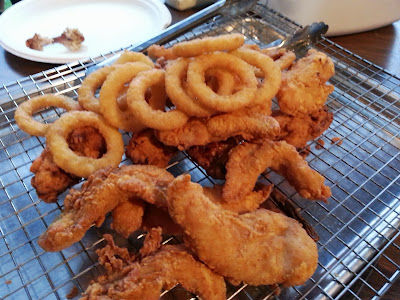 Hey!! Looks like there's a half a bag of O-rings left from the other night!  Schweet!
At this point, the only thing left to do is pull out some dipping sauces and get to stuffin' these in my hungry facehole! 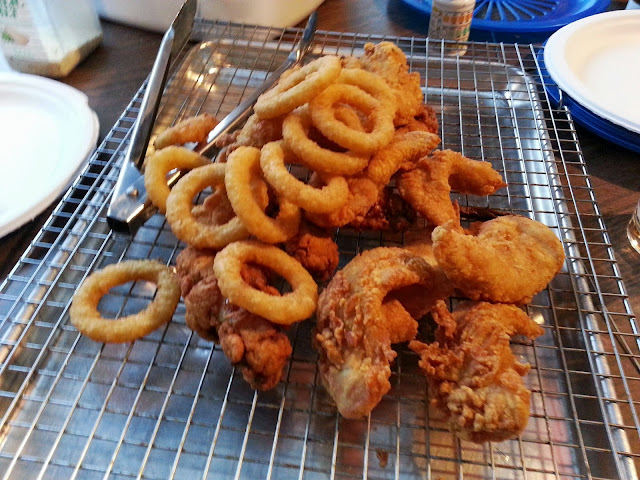