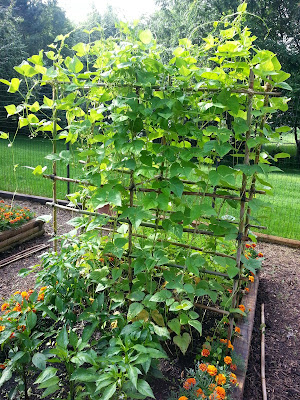 A bit of reconnaissance on my part has yielded surreptitiously obtained pictures of the garden maintained currently by Byrnestyle Agro-Corp!! Check 'em out!

Being the rebel that I am, I siezed the opportunity when I had one to snap off a bunch pics of the growing operation going down at Byrnestyle Agro-Corp!
Shhh!!!  Don't tell Eddie!!! :-D 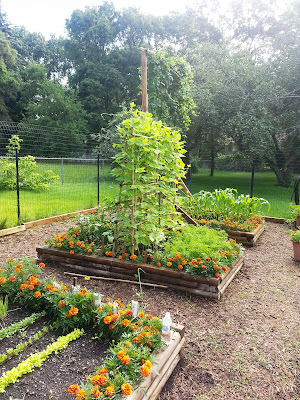 As expected, the Byrnestyle Agro-Corp (BAC) seems to be running a tight ship!
Unf, despite his best efforts, Byrnes has had to contend with a hungry varmint that managed to sneak in and decimate his crop early in the season!  Oh noes!!! 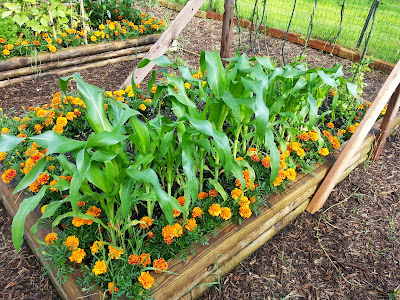 Fortunately for him (& not-so-fortunately for his groundhog tenant), he managed to smoke the little bastard out of his luxury garden-view residence under the shed on the west side of the garden!
Let's just hope he doesn't come back w his little buddies for a second helping at the buffet! 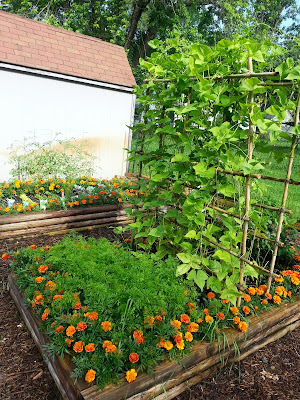 As shown above, the BAC bean plants are certainly prodigious this season! 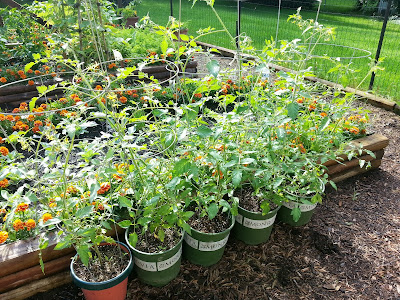 These 'mater plants are the replacements for the ones chomped-on by the groundhogger!
Eddie claims that the pots in which they reside are large enough.
We'll see, bro, we will see. 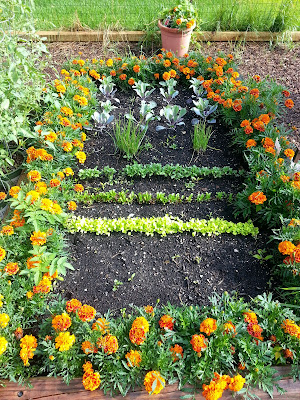 Does our dear friend Eddie suffer from a wee twinge of OCD?
Nawwwww, couldn't possibly be the case! 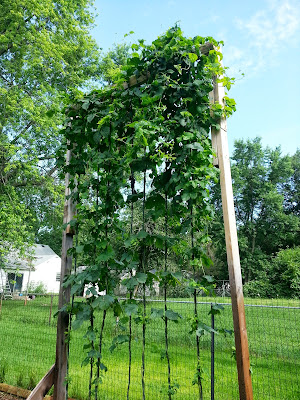 Get a load of these hops plants!!! 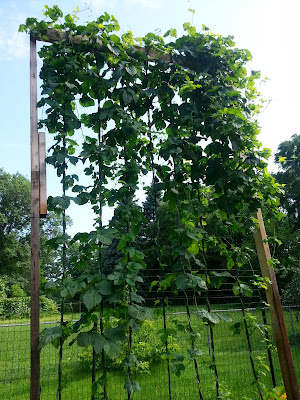 Who knew Eddie had 10ft tall hops plants?!
No one 'cept Lauren!  Well, I've certainly fixed that now, haven't I?! 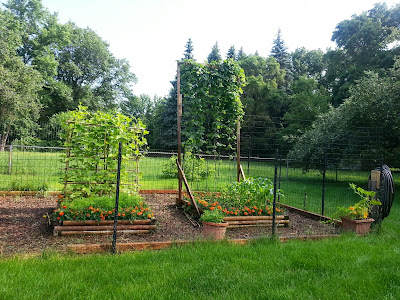 Overall, The BAC garden is lookin' pretty sweet, but in no way does this count as an admission that this garden beats the one at the Brewster Roadhouse! 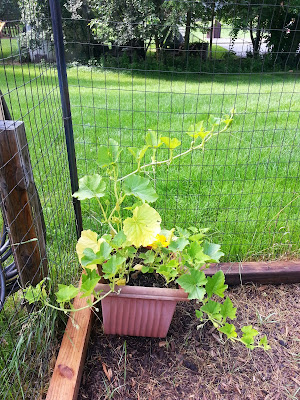 This is either squash or zucchini! 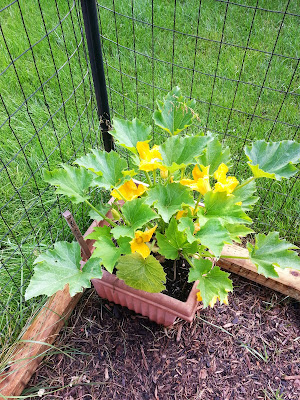 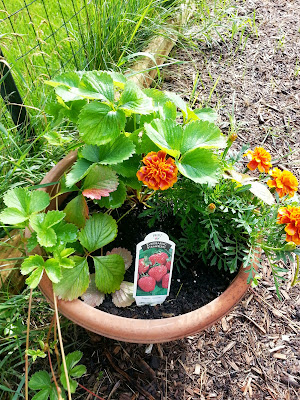 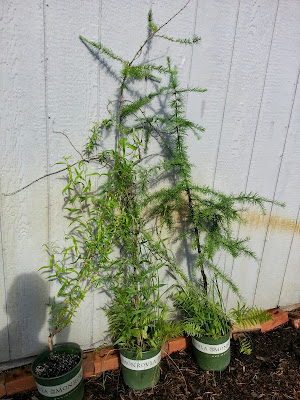 And here we have Charlie Brown's Xmas Trees! 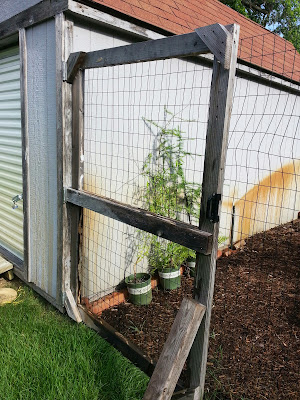 This gate now has a very fancy schmancy engraved/wood-burned BAC placard mounted at the top! 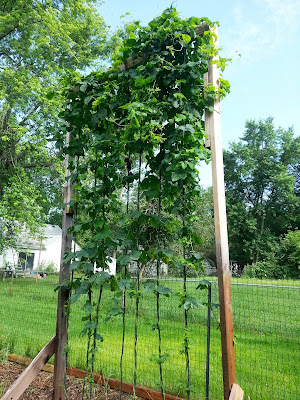 Allegedly, these hops won't be truly ready to brew with until 3 seasons have passed, according to the SNOB's at Hopman's Homebrew Supplies!
Something tells me that we're not going to wait that long to give it a shot though! 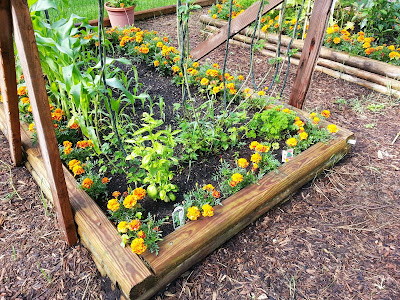 Somehow, the vines just climbed right up the ropes Eddie hung as trellis! 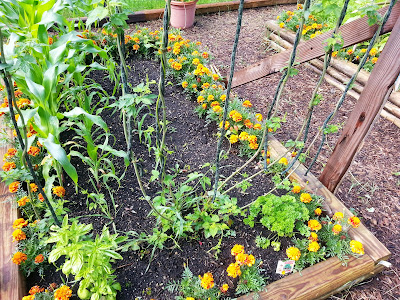 I found it rather remarkable just how neat and orderly this plant seemed to grow! 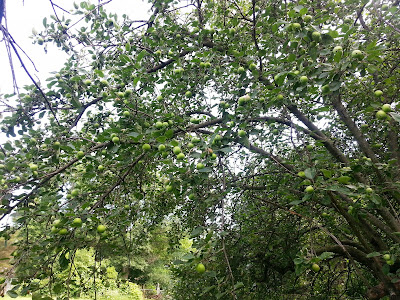 Eddie also has a few old apple trees past their prime which we will soon be using to smoke copious amounts of meat! 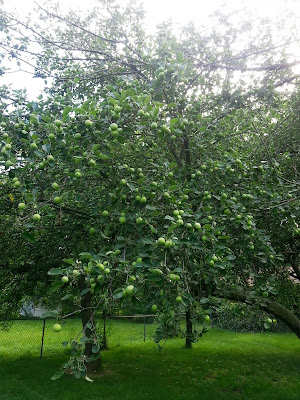 There are BUTTLOADS of apples on these trees, but they are all bitter as hell! Too bad, eh!?

I'll say that I am rather impressed with the way BAC has managed to recuperate from varmint attacks and the over-abundance of rain we've had lately!
Well done, Byrnestein, but you'll have to do better than this to out-do the master gardener at the Brewster Roadhouse!!!! 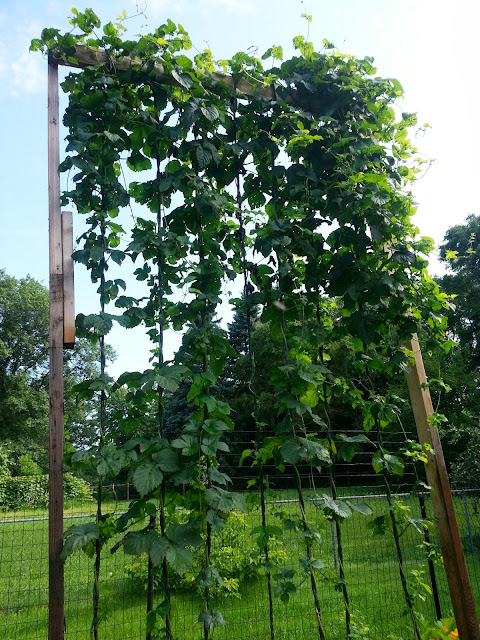