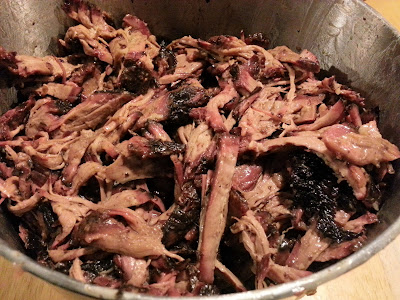 Savory? Mouth-watering? Űber-tasty? Unbelievable? I'm not sure that there is one single adjective that can adequately describe how phenomenal this hickory-smoked roast beast came out!! Take a gander on how I made the magic happen! 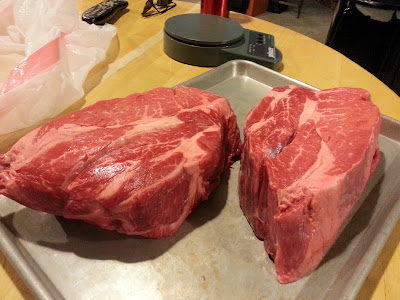 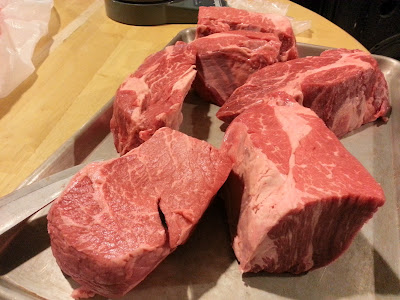 I whacked 'em into manageable-size pieces
so that they would be easier to maneuver in the smoker! 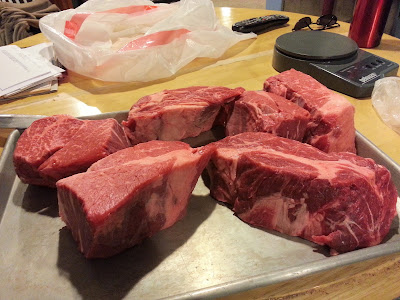 Also, cutting them up a bit increases the amount of surface area
to which the rub can cling while at the same time
reducing the amount of time needed to smoke the meat! 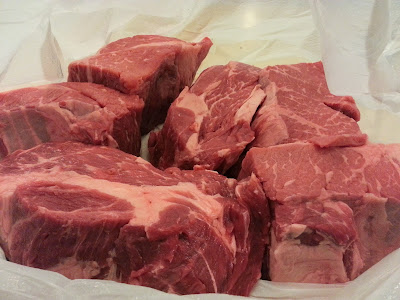 Toss them into a garbage bag or two so that you can easily
rub 'em down w seasoning! 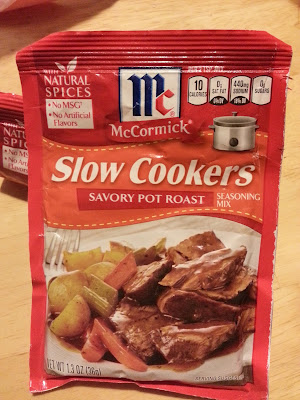 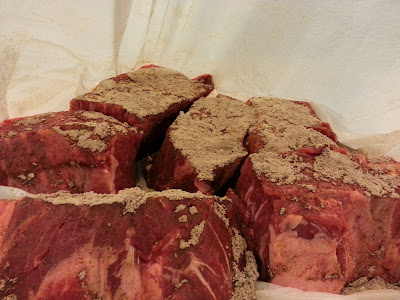 Throw them in there w a few tablespoons of vegetable oil! 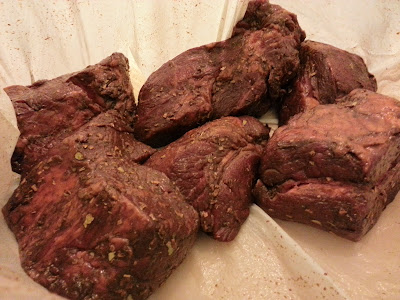 Squoosh them around until they are evenly coated!
Now, toss the whole thing in the fridge over night to let the love happen! 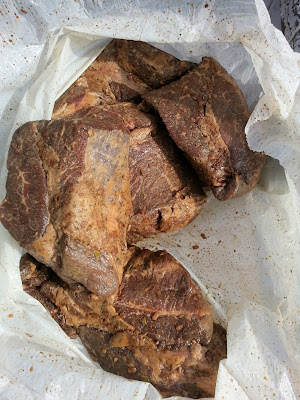 24 hrs later and the meat has absorbed the seasonings nicely! 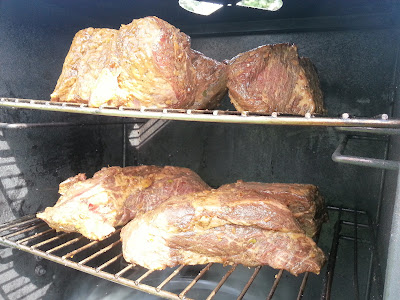 Into the smoker they go! 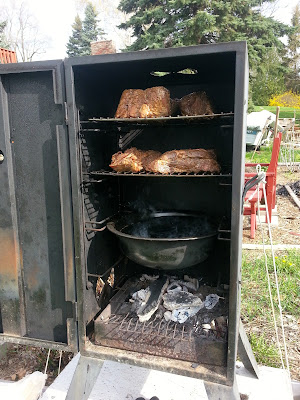 Try to give them a little elbow room
so that the smoke can penetrate them from all sides! 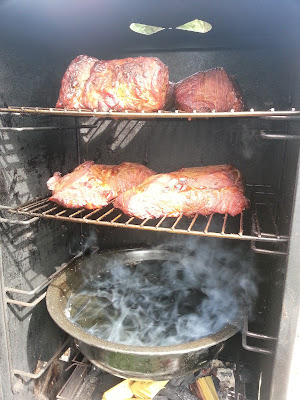 ALWAYS be sure to put a pan of water in your smoker
or you will end up w lumps of charcoal instead of juicy meat! 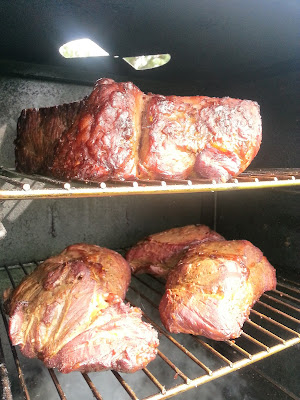 An hour or so into the process and it's startin' to look good! 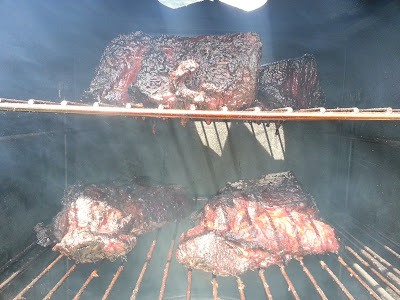 Another hour or so after the last pic!
Commence mouth-watering!
Resist the urge to pick at it! 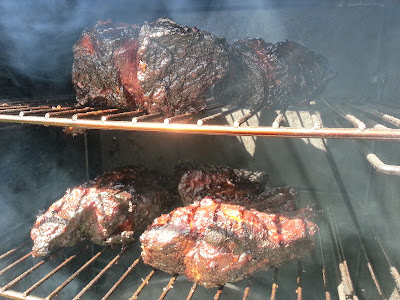 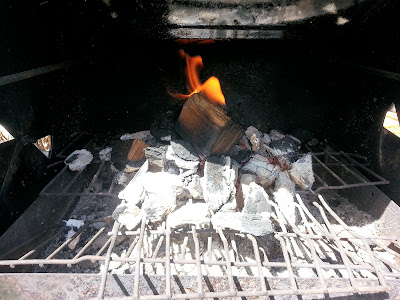 Don't forget to keep an eye on things!
When a piece of hickory ignites, toss it back in the bucket to soak again,
then replace it w more waterlogged wood!
Don't put too much hardwood lump charcoal in there!
The goal is slow and low smoking, not high-temp baking! 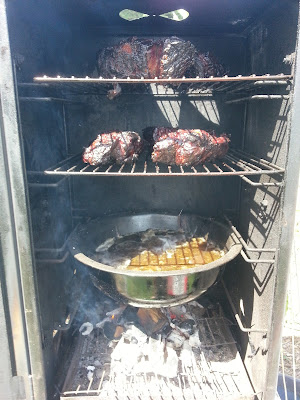 Just another hour or two oughta do it!
Close it up or it'll never get done! 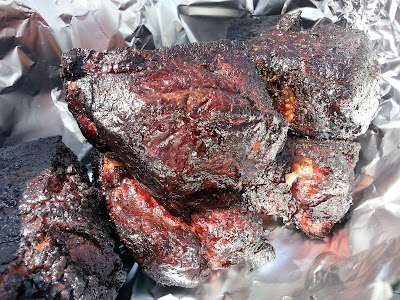 Finally!  After just over 5.5hrs, it's ready for the next step! 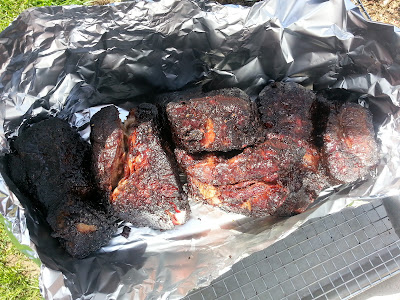 Arrange it all neatly in the foil boat you've made... 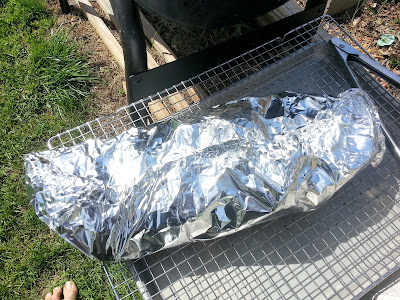 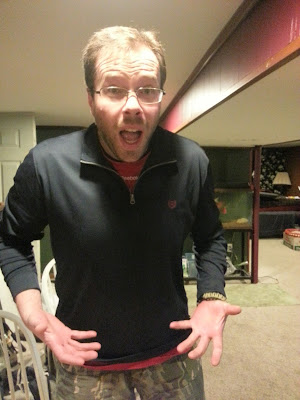 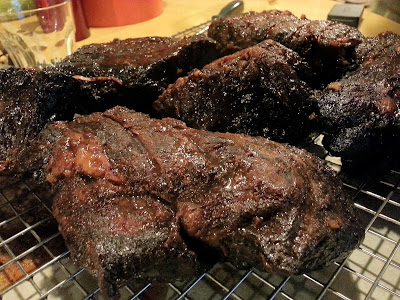 Yep!! Looks like it's done to me!
Once it is cool enough to handle... 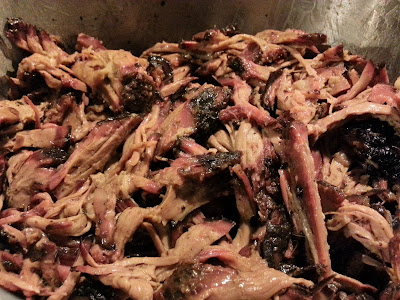 Take out any major lumps of fat and shred up the rest!
Doing this will necessitate reheating this before you chow down! 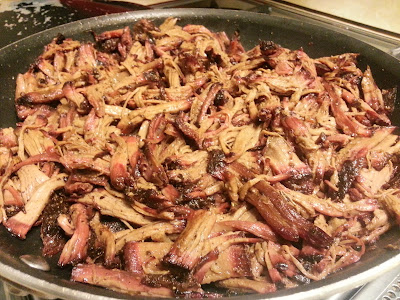 So, into a frying pan for a quick reheat session! 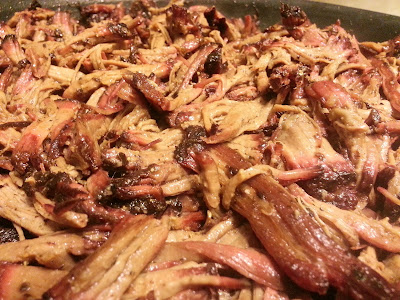 Now is the perfect time to add a little
sea salt, garlic, and freshly ground black pepper!
Don't forget to toast up a few rolls so you can make sammiches!! 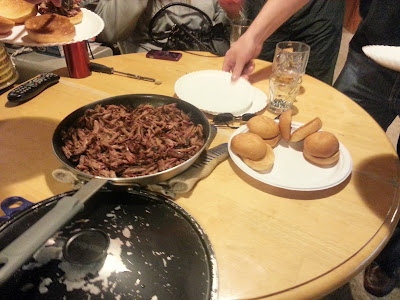 Now, serve it up and watch as your friends
devour this like a pack of hungry wolves!
My only regret was not having made at least DOUBLE this amount!
This had been over 8 lbs of meat to start w, but I ended up w only a tiny
little tupperware container of it by the end of the night!
This is certainly something I plan on doing again in the very near future! 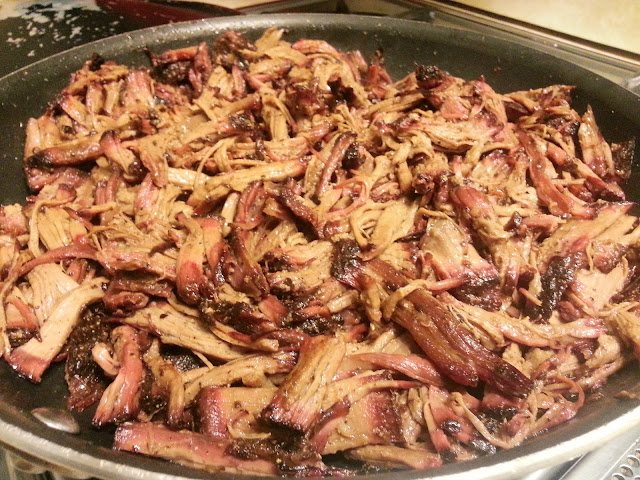