As they say, "Once a cheater, always a cheater" though, when it comes to cooking, cheatin' isn't necessarily always a bad thing!  We've all had those days when work sucked, the fam is driving ya nuts, or you've simply not had enough rest to deal with all of the b.s. that had been dealt to you.  On such occasions, most of us are tempted to just scarf down whatever crapola that is within arm's reach without regard for cost, either financially or physically.

As a result, we may gorge upon whatever shitfood (see image on right) may be easily nukable as a means by which to mitigate the hunger that had been plaguing us since the last time we'd eaten -- seemingly days ago.  For this reason, I've created a repository of easy solutions to feeding your face when you've contracted a particularly nasty case of the Aw-Fuck-It's!!  This just so happens to be the first (of hopefully many!) recipes for satisfying your hunger without resorting to or relying upon any shitty, pre-packaged meal found in your grocer's freezer!

Anyone who knows me, knows that I love shopping at Sam's Club.  I need not get into detail about the cost-savings of buying in bulk for we are all aware that acquiring one's consumables from such a venue is FAR more cost-effective than obtaining the same quantities of similar items at the local grocery store.  For an in-depth lecture on this subject, please check out my forthcoming book on contemporary cooking due out sometime later this decade!  For now, continue reading onward!


Wandering through my local Sam's the other day, not for the first time did I spy the "Take-&-Bake" pizzas in the cooler section.  Now, I'm a serious pizza snob from waaaaay back because I actually used to sling 'zzas back in the day for none other than Mike Illitch himself (well, indirectly).  As such, I have the ability to make pizza from scratch, dough included, without breaking a sweat, so I almost never actually buy retail pizza, whether from a restaurant or (especially) pre-made. 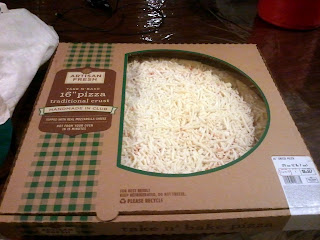 However, I've walked by the cooler case full of 16" pizzas touting the slogan "Made fresh in club!" many times wondering just how good these things actually come out when you make them yourself at home.   Typically when I make pizza, it requires a bit of foresight and planning in order to make the dough sufficiently ahead of time to allow it to rise properly, sheet it out, sauce it, then cheese it, before getting down to brass tacks and putting on the toppings.  These pre-fabricated pizzas can be purchased with pepperoni (the most over-rated pizza topping!) or as a "Supreme" with the addition of green peppers, onion, black olives, and mushroom slivers.  Alternatively, plain cheese pizzas can be obtained for slightly less than those that have toppings -- under $7 bucks actually -- which makes them a great value for what they are -- or so I was about to determine one way or the other!

I had considered several times in the past picking up one of these pies and giving it a shot to see if the savings in time and energy was worth spending the money on the convenience of not having to make a dough, sheet it out, sauce it and cheese it.  After all, the majority of time spent making a pizza is allocated toward the creation of the dough from scratch and then sheeting it out in preparation for the application of whatever toppings are about to go on it.  If all that hassle could be exchanged for a reasonable price & without a huge degradation in quality, then it might be worth the savings in both time and effort on those occasions when I have neither the time nor energy to make a pie from scratch. After nearly a year of intending to do so, I decided to pick up one of the plain cheese pizzas to give it a shot with a few of my own toppings to see if the sacrifice in quality was sufficiently low enough to justify not having to make a dough from scratch.  Due to the uncertainty of the results for this first attempt, I decided that this little food experiment was best conducted on an evening during which I had no one but myself to (un)impress given the possibility of total failure.  For only $7 bucks, I figured that I didn't have much to lose if it were a total loss and, if not, then I might be able to cheat once in a while when I'm in a pinch! 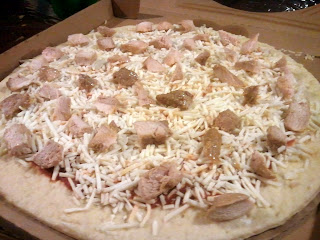 I picked a night were no one was planning on joining me for dinner & decided to give this a good effort.  I knew immediately not to expect the same results as a 100% homemade pizza, but I remained cautiously optimistic.  As shown in the pic above, I was sort of underwhelmed when I first saw what was in the box, but I decided to go for it anyway and I'm glad that I did!   The first order of business was to get busy hackin' up a leftover pork chop into smallish nugs that could be distributed fairly evenly.  I remember thinkin' to myself that I was nice to not have to deal with all the hassle that is involved with dough production as I dealt out the chunks of meat between swigs of my vodka & tonic.

A green pepper was the next victim of my blade and, moments later, it had been tossed onto the 'zza before moving on to the next round of toppings!

A smallish, virgin onion that had never prior to its rendezvous with me known the touch of a man, I then sliced thinly into slivers before sauteing them ever so slightly to convince them of their good treatment (as is done in the Netherlands!), then intermingling them among the other toppings to let the love start to happen.


Once properly applied, the onion, green pepper, and pork awaited the addition of the final topping without which this pizza would have felt -- naked.  After having discovered that I was completely out of mozzarella, I got creative with some sticks of colby jack string cheese, which seemed to be just what was needed to top this all off!

25 minutes later (10 more than instructed on the package!) and this pie was screamin' hot and ready to come out of the oven!!  A display of sheer willpower was necessary to keep from diving right into this gorgeous concoction while it cooled far too slowly on a rack.  I hold firmly the opinion that uncut pizza is one of the sexiest-looking foods that can be made! AmIwrong? I think not!

And what of the results, you ask?!?  Not bad!  In fact, pretty damn decent for what it was worth!  As can be seen in the images, the chunks of colby jack melted nicely into the interstices of the other toppings which then amalgamated when cooled into a piping hot, ooey-gooey, thin-crust pie that was just begging to be sprinkled in Fiery Diablo Seasoning and hucked upon with abandon and disregard for the well-being of the roof of one's formerly non-burned mouth!! 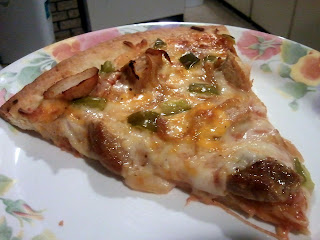 Indeed, the success of this experiment means that I can now use this as a backup plan for nights when I'm short on time, but I've got a crew of hungry guys coming over for a hockey game and some brewskis!  The ease with which a cheater pizza of this nature can be whipped up makes it worth every iota of energy saved in not having to fart around pulling out the flour, mixing, kneading, stretching, sheeting... et cetera!  Give it a shot, you'll probably be as pleasantly surprised with the results as I was!

Post a comment below to let us know how yours comes out or to tell us how you think this could be done bettter/more efficiently!