Each Memorial Day Weekend, Uncle Phil throws his annual Seafood Boil, to which we were heading when the saga left off.  Indeed, it was a beautiful day for hanging out outdoors sluggin’ down ice cold beer and huckin’ on spicy hot seafood!   We careened toward the party as fast as reasonably possible while driving down Ohio’s meandering county highways and roads in a vehicle with out-of-state plates, which might have been easy prey for a bored state trooper had it not been for the indispensable driving skills of our most-frequent landship captain, Eddie Byrnes.


Our arrival at Unc’s house was met with the traditional cracking of brewskis and our saying of hey’s, hi’s, and hello’s to all the folks that were already there hanging out having fun.  We rolled in just as Uncle Phil and Harry were starting to throw the ingredients into the 3 stock pots that they had on the boil already.  I gave them a little help opening lids and whatnot, but they were better off with me out of the way.  Once they had gotten to the point where the boil had to cook for a while, we were all able to take a load off and relax a bit. 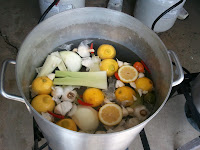 Games of bocce ball and corn hole were being thrown as those of us out-of-towners who had arrived tardy scarfed down heaping bowls of steaming hot jambalaya that had been served up as a precursory course of food for the family and friends that had gathered that day.  I think that we would have happily eaten even lousy food at that point due to the extreme hunger we’d been experiencing but, fortunately, this jambalaya was awesome (as usual!) and just what the doctor had ordered!  I’m particularly fond of the subtle, cumulative heat imparted to this food-of-the-gods by the homemade dried/crushed habanero peppers that had been grown by Unc himself!
As good as the jambalaya is, the main attraction is really the seafood boil!  Over the years, Harry and Phil (co-hosts of this shindig) have gone from one to three large pots in which to cook the grub in order to accommodate the 20 or so people with big appetites that attend each year!  Unc & Malue have the recipe down to a science, knowing the various times at which to throw in each of the ingredients to ensure that they cook properly, but not moreso than necessary.  In a little less than an hour, they had managed to whip up another incredible seafood boil, which we all attacked as soon as the green light was given!
The next hour or so was spent chowing down on the medley of mussels, clams, scallops, shrimp, crab legs, and potatoes!  My personal favorite, however, is huckin’ on the hot corn from the boil!!  For whatever reason, the corn thrown into the batch has a tendency to soak up more of the heat (read: spiciness) of the boil, making each piece an irresistible cob of spicy goodness.  Aside from the pound or so of seafood that I scarfed down, I must have had at least 3 whole ears of corn during that sitting!!
I think I speak for all of us in saying that this year’s seafood boil was a great success!!
The remainder of the evening was spent drinking, tossing bocce balls, and there were even a few zany shenanigans like shaving the long, rockstar-like locks of hair from the head of young Chuck Malue.

Though the beer kept flowing and the tunes kept jamming as the evening kept on keepin’ on, we somehow managed to survive yet another fun, yet drunken and somewhat debaucherous episode of the Memorial Weekend Saga.  Little did we know that there was a lot more in store for us for the rest of the weekend!
Posted by Steve Basiewicz at 5:12:00 PM