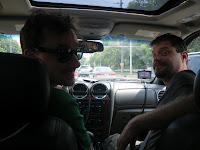 Our weekend adventure didn’t start until 6:01pm, and it wasn’t a minute too soon!  We all had to wrap up what felt like an unbearably long work-week before we could finally pack up the Envoy and set sail for the pastoral fields of Ashland, Ohio.


Hitting the road was fairly painless.  Our first departure only got us about a mile and a half down the road before we realized that we’d forgotten some mission-critical shit at my place.  Our final time of departure was 7:38pm, which put us at the cabin sometime between then and sun-up.

Our progress stagnated somewhat during our journey through Southgate, Michigan, due to our pitstop at Sam’s Club.  I ran in to order a pizza for the road (because we were all starving to death) while Byrnes and Amanda gassed-up the vehicle.  Unf, our late departure meant that our arrival at Sam’s Club was just prior to closing, so we were totally denied on the pizza.  This, in turn, meant that we had to go searching for the nearest place that could make us a pie on the quick, so we stopped in at the last place to buy booze before crossing the border into Ohio (called Jake’s Liquor) to ask about where the closest and best pizza could be found.  Oddly, the lady who had been so pleasant the first time we’d stopped in to buy liquor and smokes at Jake’s was not in the best of moods that evening and was somewhat short on words.  Regardless, we were told of Santo’s Pizza, which henceforth shall be referred to as Sancho’s Pizza, just up the road; so off we went on our quest to obtain reasonably affordable sustenance – both financially and physically – for none of us wanted diarrhea of the wallet or the arse.
As it turns out, Sancho’s pizza was half-way decent -- not great -- though better than nothing.  Getting back on the road after this extended pitstop wasn’t exactly expedient, but we were all much more content after having stuffed our guts full of grub (and even a quick cold one for those of us who weren’t driving!).
‘Twas smooth sailing after the debacle getting fuel, smokes, and sustenance in southern Michigan.  We cruised on down the turnpike toward an exit not far from the middle of nowhere, which led us to a two-lane highway off which another road took us ever closer to our destination.
The anticipation of our arrival was matched only by our yearning to get the hell out of the vehicle after what seemed to be an unnecessarily long, though enjoyable, journey.  Quickly forgotten were all the trials and tribulations of the week once we’d all had a chance to stretch our legs and slake our thirst with a couple of brewskis.
Brother Chad was already at the cabin awaiting our arrival with beers in the fridge and tunes on the radio.  We arrived shortly before midnight without much gas in the tanks -- the Envoy and our own. The four of us made quick work of killing a considerable amount of beer before throwing in the towel and calling it an evening, for there was much work to be done in the morning.
The brothers Byrnes managed to whip up a tasty breakfast with which we slugged down some potent java to get our engines revved up after what felt like an insufficient amount of sleep.  Before we knew it, the clock struck beer-thirty and it was time for us to crack ‘em and then get crackin’ on getting shit done!   A quick social broke the huddle indoors and sent each of us on a mission to start knocking out the chores that awaited us patiently.
Waist-high and jungle-thick, the lawn gave the 46” Husqvarna and Eddie quite the challenge.  Fortunately, Eddie woke up with enough patience to cut the entire lawn in a painstakingly slow gear in order to prevent the blades from bogging-down from too much grass being cut at once.  Chad cleaned up around the yard and in the cabin as I wrangled and wrestled w/ the weed whipper hacking down what Eddie couldn’t get to.  Amanda did a great job of preoccupying Gilly, Chad’s 8 y.o. son, so that we could kick ass around the property getting shit done.
At some point during the early afternoon, the weed whacker ran out of gas at just about the same time that I did, so I set ‘er down, then laid down upon the grassy driveway whereon I had lain the previous time I’d been to the cabin for a bit of a respite from the work being done.  Not long had it taken me to zonk out cold from the drowsiness that had been accumulating throughout the day thus far.  The droning sound of a lawn mower is the perfect lullaby for taking a quick siesta while doing chores outside on a beautiful day.
The next thing I knew, I was awaken abruptly by the bite of a horsefly on my bicep, a clear sign from the Universe that nap-time was over and it was time to get my ass back to work.  Up and at ‘em, I grabbed a pair of ‘skis for Manda and I, whom I’d found on her return from her & Gilly’s trip to the local sandbox.  Apparently, it was time for the two of them to go jump in the lake, so I decided to join them for a quick dip to rinse the last of the cobwebs out from the nap and the grass that had stuck to me from sleeping in the driveway.  The water was the perfect temperature in which to swim, so Amanda and Gilly screwed around jumping off the dock after I  headed back up to the cabin to finish giving them a hand with the yard work. 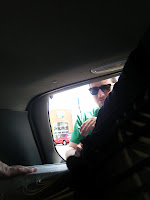 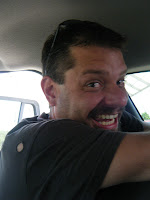 Another hour or so of landscaping went by fairly quick and, before we knew it, we were all back in the lake taking a final dip before we got our shit packed and ready to hit the road.  Indeed, it was later in the day than we’d hope to depart the cabin, but we’d managed to get nearly all of the chores done, of which the brothers Byrnes were greatly appreciative.
Both thristy and hungry, we packed the vehicle and trailer hastily before saying our adieus and venturing toward the not-so-distant land they call Parma Heights, Ohio.  Our anticipation of the incredible food that awaited us upon our arrival was the only thing that kept us from stopping somewhere to gorge ourselves upon cheap and shitty grub after having worked up ferocious appetites from doing chores all morning.  Indeed, breakfast had been a distant memory as one country highway turned into another as we followed our GPS toward the next great leg of our Memorial Weekend adventure...
Posted by Steve Basiewicz at 4:47:00 PM