Kitchen in an Aquarium @ Whole Foods 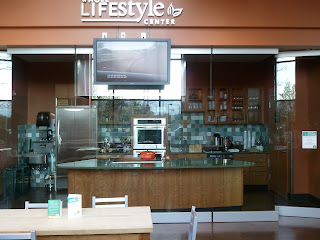 Whole Foods is awesome.  Up until yesterday, I had been thoroughly unaware of just how awesome.  Sure, I had been quick to pass judgment on the place.  I had always had the perception that it is an expensive store run by pretentious hippies for pretentious yuppies.  Well, I was only half-right!  The hippies are anything but pretentious!  The store is still expensive and caters to a pretentious crowd of people with money burning holes in their pockets, but a large portion of the food is made in-house by nice folk, many of whom have been friends of mine for years.  Whether it be the pizza made in the wood-burning brick oven or the stunning variety of hand-made sausage, it's obvious to me that this place is pretty legit.  Though I personally feel that ALL of their prices should be dropped by at least 20%, I also hold the opinion that they put great care and effort into the food they make! 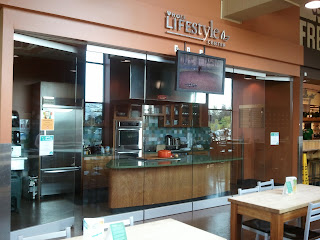 I also had no idea that there was a bar with microbrews on tap until a friend mentioned it this past weekend.  This had certainly piqued my interest and I just had to check it out after I'd heard about this. Who knew that you can get a pint and a burger during Happy Hour for only $5.99?!  Why hasn't anyone mentioned this to me before?!   Regardless, I was most thoroughly impressed by the kitchen they had set up for demonstration purposes behind a giant set of glass panels!  Now I want my own kitchen in an aquarium!!   'Cept mine would have a "clean cycle" so that I could exit the room, close the door, hit the button and walk away after making a mess!  Check it out!  And yeah, so maybe I *am* the last person out there to have stepped foot into a Whole Foods!! So, what of it!?  :)